This episode was broadcasted from the E Center in Salt Lake City, Utah and featured matches, interviews & storyline segments on the road to the ‘WWE Armageddon 2003’ PPV.

• RAW Star Says She’s Not Retiring – Will Be Back Soon

According to the Dirty Sheets, former RAW Women’s Champion Alexa Bliss is continuing to fail the WWE Impact Tests for concussions and still not having feelings in her forearms due to neck issues.

At this point, word going on is that things are looking bad for Bliss as there’s a chance that she might never wrestle again.

After reading these reports, a fan asked Alexa on Instagram about the possibility of retirement from in-ring competition.

Below is what “Little Miss Bliss” replied: 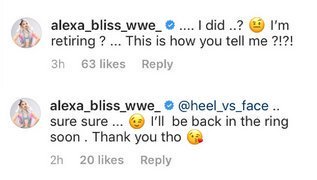