It was broadcasted from the Madison Square Garden in New York City, New York and featured matches, interviews & storyline segments on the road to the ‘WWF WrestleMania 2000’ PPV.

1. The Hardy Boyz vs. The Acolytes

4. Rocky Maivia vs. The Brooklyn Brawler

For those who don’t remember, RAW & 205 Live wrestler Lio Rush made the following tweet directed towards Emma after WWE announced that Emma has been released: 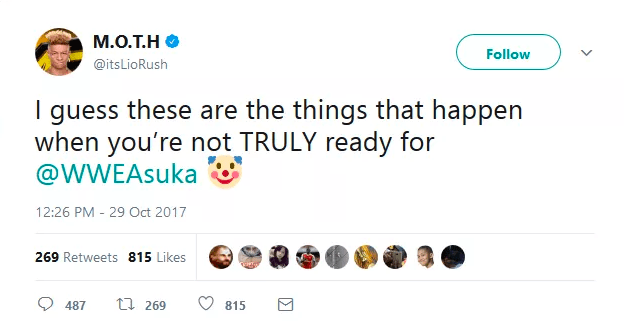 During a recent appearance on Chasing Glory with Lilian Garcia, Lio Rush talked about getting heat for this tweet and what he did after it.

Below is what Lio said:

“It hit me so fast and hard I remember I was sitting at a Waffle House when I tweeted that out. I didn’t even mean it in the slightest way to be hurtful or anything.

I remember being so entertained with what Asuka was doing and her saying that nobody is ready for Asuka, and honestly, it was so stupid. People tried to tell me that they think I should take the tweet down and I didn’t really see the negative in it at all and I even left it up when somebody told me to take it down. I was like, no, it’s fine, I didn’t mean it in a negative way.

I felt so bad and reached out to Emma and at first I had mixed feelings about it and then ultimately I just realized I messed up and it was such a sensitive and real moment and it was new to me because I never really seen WWE tweet anything out like that where they were releasing a WWE Superstar.