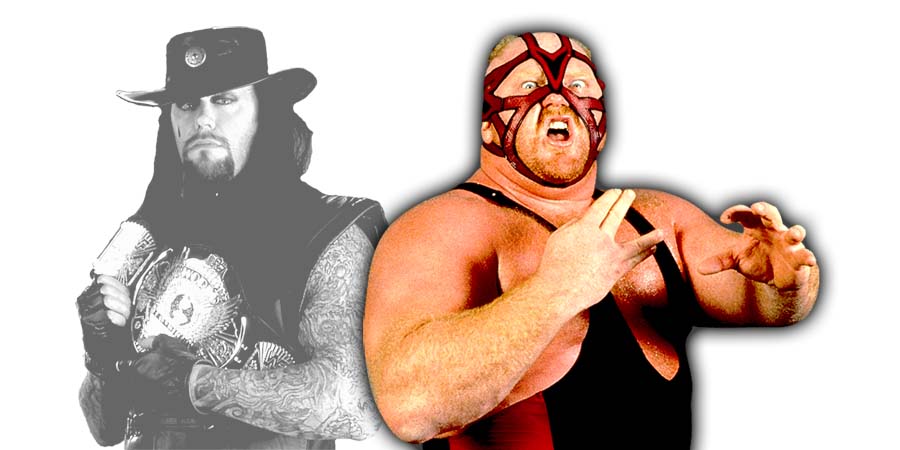 Big Van Vader passed away this past Monday at the age of 63. His son broke the news of his passing earlier today.

With that being said, let’s recall a moment where Vader got arrested for protecting the wrestling business.

Vader and then WWF Champion The Undertaker were guests on ‘Good Morning Kuwait’ show back in April 1997 to promote the WWF tour in the Middle East.

“In Kuwait they say this wrestling is not for real…you act?”

This led to ‘The Deadman’ giving the following answer:

“Well, let’s put it this way…if what we do is acting, we take a normal man and break him in half. It’s such an unoriginal question to ask… wrestling is one of the finest athletic endeavours that you will ever see. Let me assure you, it’s the most physical you would ever do in your life.”

The show host didn’t give Vader a chance to a express his views on this matter and this resulted in Vader interrupting the host and saying he wants to answer that question as well.

Below is what Vader said:

“My astute colleague – the Heavyweight Champion of the World – is a very diplomatic individual. I’m perhaps not so diplomatic – in fact, I find your question insulting to what I do. (Vader then tossed the table and grabbed the host by his tie) Does that feel f***ing fake, huh?”

You can watch this interview segment below:

For this incident, Vader was charged with assault and use of obscene language (as it was a huge deal in Kuwait to swear on TV). Vader’s arrest unfortunately fell at the start of a religious holiday (so the courts were closed) and Vader was trapped in Kuwait for two weeks.

During an interview with PWMania, Vader revealed that the show producer told him & Undertaker that “is wrestling fake?” question was coming their way and they told Vader to make a scene to boost the ratings for their show. However, the producer didn’t tell the show host that Vader was coming at him.

Below is what Vader said:

“I was acting under orders from the producer…But when I did what I did, the interviewer was caught off guard and was frightened. The cops were called and I went to jail.”

However, Old School WWF Veteran Bruce Prichard noted on his ‘Something to Wrestle’ podcast that Vader went against what The Undertaker wanted and were warned to not touch anybody.

“The guys did know that question was coming. And Undertaker told everyone he would handle it…don’t answer, don’t remark, just let him handle it. The guys were told not to touch anybody, and obviously no cussing…there was no reason to handle it that way.”

Whatever happened, Vader did prove that he would cross any line to protect the business that made him.