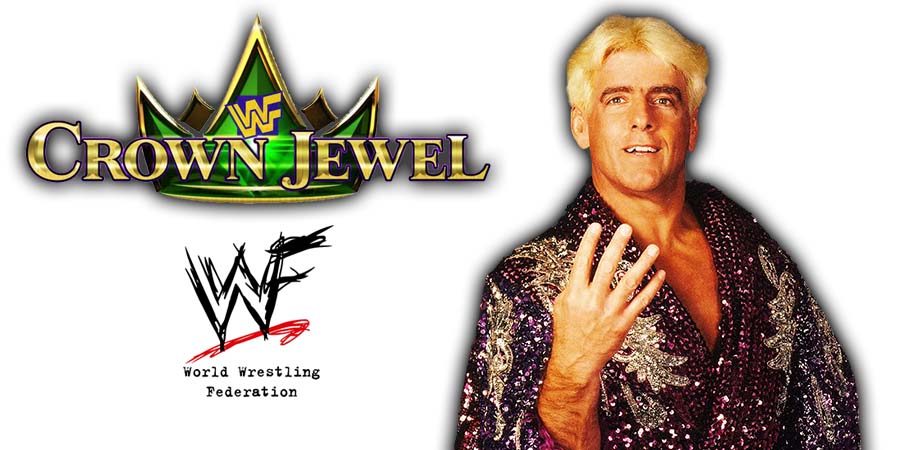 2-Time WWE Hall Of Famer Ric Flair has been removed from WWE’s opening show intro and former Women’s Champions Sasha Banks & Naomi have been added back.

This change was shown at the Crown Jewel 2022 premium live event.

WWE previously removed Flair’s “Wooooo” from their intro after the Dark Side Of The Ring controversy, but later added it back.

Flair tweeted the following after it was added back:

After watching Crown Jewel and noticing that his “Woooo” is gone, Flair tweeted:

“Hoping This Was An Error… Watching The #WWECrownJewel I Couldn’t Help But Notice My Absence From The Opening.

Great Show! Tremendous Performances! Congratulations To All The @WWE Superstars!

If I Turn RAW On Monday And I’m Not On, I’ll Absolutely Have To Speak On The Matter!”

On this day in 2018, we lost Old School Wrestling Legend José Lothario (Real name: Guadalupe Robledo) at the age of 83.

José Lothario wrestled for several National Wrestling Alliance territories during his professional wrestling career, which eventually made him an NWA Hall of Famer.

He trained Shawn Michaels in the early 80s and by 1996 became Michaels’ manager in the World Wrestling Federation before the legendary WrestleMania 12 Iron Man match, where José led The Heartbreak Kid to win the WWF World Heavyweight Championship.

The last time Lothario was in Shawn’s corner was at the 1997 Royal Rumble PPV, where HBK won the WWF Title for a second time.