– The Giant Vs. Jim Duggan

– Ric Flair & Arn Anderson Vs. The Rock and Roll Express

– The Steiner Brothers Vs. Dave Taylor and Bobby Eaton

• Robbin Young Claims The Rock Had An Affair With Her & Committed Adultery In 2004, Says Rock Has A Fetish She Would Never Allow

Actress Robbin Young posted the following about this on Twitter:

“Congratulations to Dwayne Johnson #TheRock and #LaurenHashian. Hopefully Dwayne will be faithful to Lauren and not commit adultery like he did with me in 2004 while he was married to Dany @DanyGarciaCo.”

She later went on to delete this tweet, but you can check out a screenshot below: 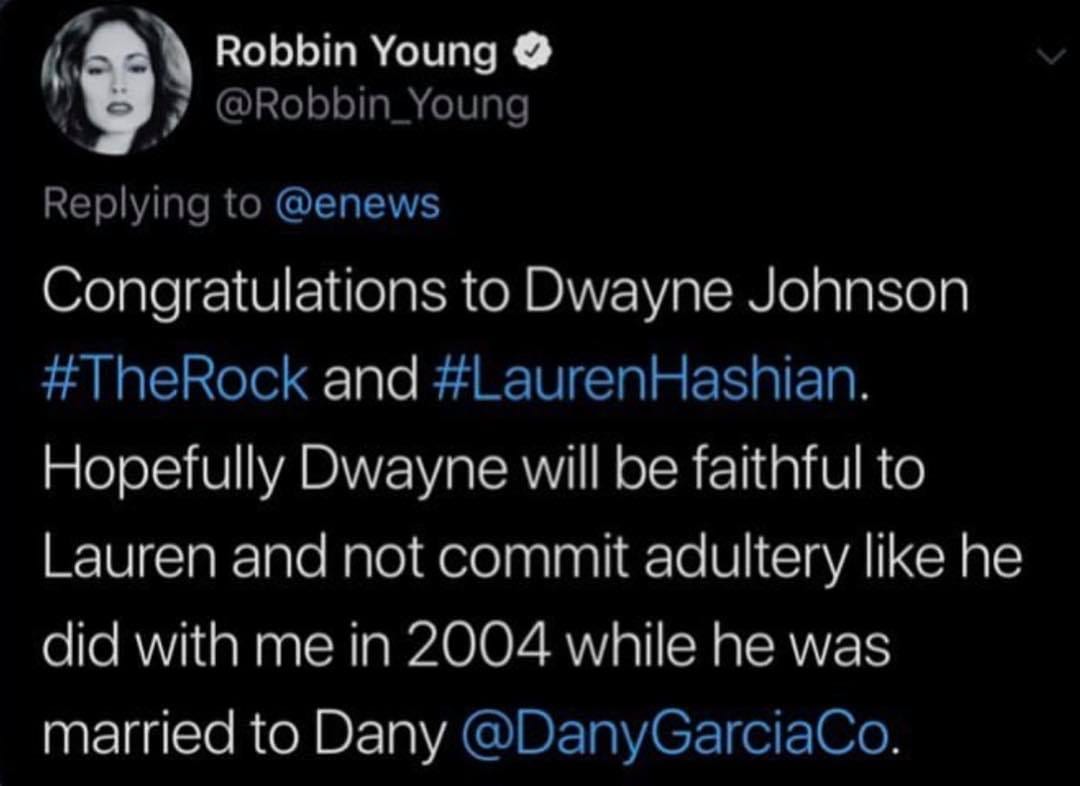 Robbin was then called out for making such a tweet and below is what she tweeted in response:

1. I didn’t know Dwayne Johnson was married when we met. He should have told me so I could make the decision if I wished to commit adultery.

2. I’m not “bitter he didn’t choose” me, because to be honest #TheRock is a lousy fu*k, and he has a sexual fetish I’d never allow.

Robbin then made the following tweet and got called out for promoting her autobiography by using The Rock’s name in a negative way:

? Those complaining about me mentioning Dwayne Johnson on Twitter and in my upcoming autobiography Nude Christian have never read a tell all autobiography?! ??‍♀️I have no love or malice toward #TheRock, but he was a part of my life and I will be talking about him and other celebs.

If talking about an affair you had 15 years ago is the only thing that’s promoting your autobiography, sis you need to rethink your life ?

This is the most desperate publicity stunt I've ever come across.

We’ll keep you updated regarding this story.