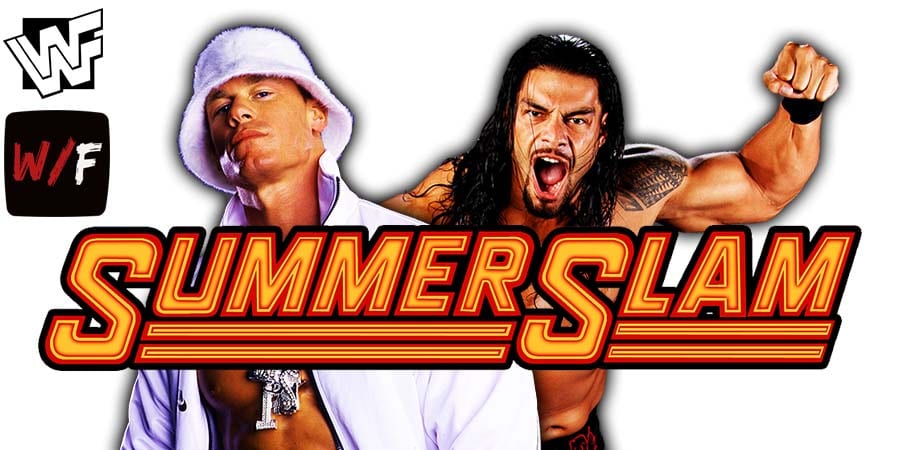 During a recent appearance on the ACC Network, Universal Champion Roman Reigns talked about WWE going back on the road, SummerSlam 2021, rumors of a match against John Cena & more.

On how the ThunderDome era helped the WWE performers:

Also I think it showed our resiliency as a product. The WWE product, everything that we do, our big mantra for our is putting smiles on people’s faces. And I think we’re in a time now where that’s more important than ever.

You know, just to provide that escapism for people, and bring some happiness and positivity for people who are struggling through hard times.”

On SummerSlam 2021 taking place at the Allegiant Stadium in Las Vegas:

“It’s going to be great. With WrestleMania being in Tampa Bay in Raymond James Stadium, we weren’t at full capacity obviously. We were still dealing with the restrictions and stuff like that.

So for us to be able to come back and bring SummerSlam into Allegiant Stadium in Las Vegas and hopefully pack that place out, it’s going to just be a really, just a good time. Just a good experience and a good vibe for our fans and our performers alike.

I think everybody is super excited about it. And to have a great location like Las Vegas and an awesome, brand new stadium in Allegiant Stadium, it’s a recipe for success for sure.”

On rumors of him facing John Cena in the main event of SummerSlam 2021:

“If John wants to get smashed, then he knows where I’m at. When it comes to whooping people’s a$$, I do not discriminate. Luchadores, mat wrestlers, Legends, Hollywood superstars, anybody. Anybody can get it.”

Reigns will defend the Universal Championship against Rey Mysterio in a Hell in a Cell match on this Friday’s SmackDown.

It was pre-taped at the Allstate Arena in Chicago, Illinois and featured matches, interviews & storyline segments on the road to the ‘WWE The Great American Bash 2004’ PPV.