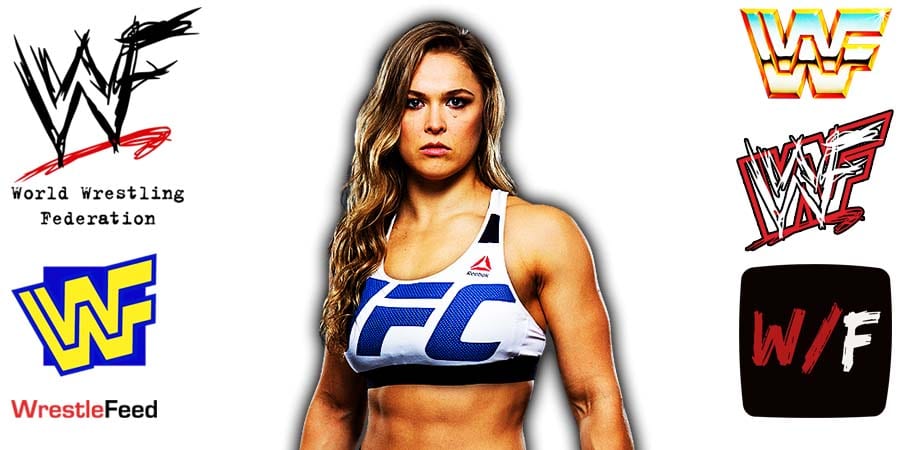 However, she’s willing to return to the UFC for one more fight – against Gina Carano.

Below is what Rousey said on The Kurt Angle Show:

“I’ve said it a million times, it’s not like it’s something new, [I would come back] for Gina, man, Gina Carano.

And if she ever was like, ‘Ronda, I want to fight you tomorrow at 205 pounds,’ whatever the hell she wants. If she wanted to come into my backyard, do a Rocky thing and we just do it in the backyard, I don’t care.

I will fight Gina wherever she wants and if she doesn’t want to forever, I’ll leave that offer there. It’s a respect thing, not a ‘f**k you, I’m coming to get you’, it’s just like ‘hey if you ever want to pull that card out, it’s there’.

I love her, thank you Gina for everything you’ve done.”

Carano & Cris Cyborg made history in 2009 by having the 1st women’s fight to headline a major MMA event. Cyborg defeated Carano on that night and gave Carano her 1st and only loss. Carano retired after that fight.

Gina has noted in the past that UFC President Dana White wanted to book a fight between her and then UFC Women’s Bantamweight Champion Ronda Rousey in 2014 and she was offered $1 million for this fight.

However, Gina said she needed 6 months to prepare for the fight and UFC Officials kept on pressuring her.

Below is what Gina said on The Ariel Helwani Show in 2019:

“[Dana White] kept [putting pressure on through the media for her to sign] and kept on doing that and I’m still searching for a team and feeling all that pressure.

Then he sent me a text message that said, ‘This (expletive) is effin’ us around’ or something like that.

So I just cut all communication after that text.”

While he wasn’t exactly a great in-ring-performer per se, The Sandman character still became a legend in the business, especially when it comes to hardcore wrestling, mainly because of 3 things he used during his iconic entrance … beer, a cigarette and his entrance theme song: Metallica – “Enter Sandman”.