– A Poem From The Genius

– The Bushwhackers vs. Scott Colantonio/Dale Wolfe

– Highlights Of The Rockers vs. The Orient Express (From WrestleMania 6)

A disabled fan claimed on Twitter that WWE kicked him out at the recent Shield’s Final Chapter Live Event for wearing a Jim Cornette shirt: 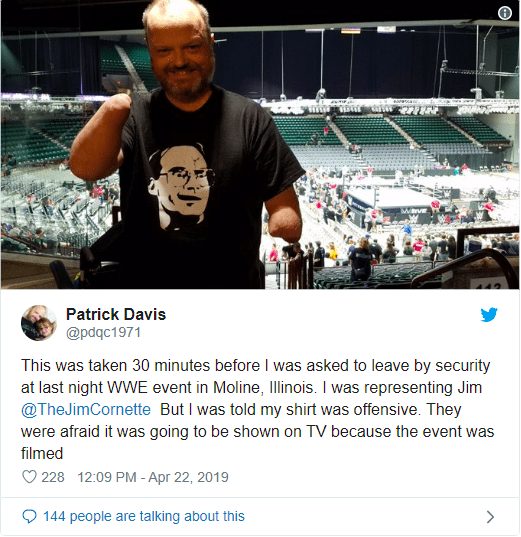 This led to Jim Cornette tweeting the following:

WTF? Seriously? I've met Patrick, @WWE, & he has more guts than anyone & the right to wear what he wants. This was bullshit. Patrick, email me at [email protected] & I will REIMBURSE you for your WWE tix. Especially now that you know not to buy any more! #Assholes https://t.co/C2oHLMbLSR

Hey Patrick. I'm sorry to hear @WWE did this. If you can get out to Chicago on July 6, I got @MLW VIP tickets for you and yours on the house.

However, the fan made it clear that his original tweet was fake and not posted by him:

I appreciate the offer but it didn't happen. I had a house guest staying with me for a couple of days who thought it was funny to go on my social media accounts and post a bunch of fake crap. That picture was taken After the event was over.

I appreciate the offer but I was never kicked out. I had a house guest staying for couple of days Who thought it was funny to post a bunch of fake crap on my social media accounts while i was at dialysis. Needless to say he is no longer here.

After the situation was cleared, Cornette tweeted the following:

NEW RULES: Never believe anyone. Never defend anyone. Never be nice to anyone. Never make offers to help anyone. It's not worth the bullshit and/or aggravation to be a nice person anymore.#NoGoodDeedGoesUnpunished