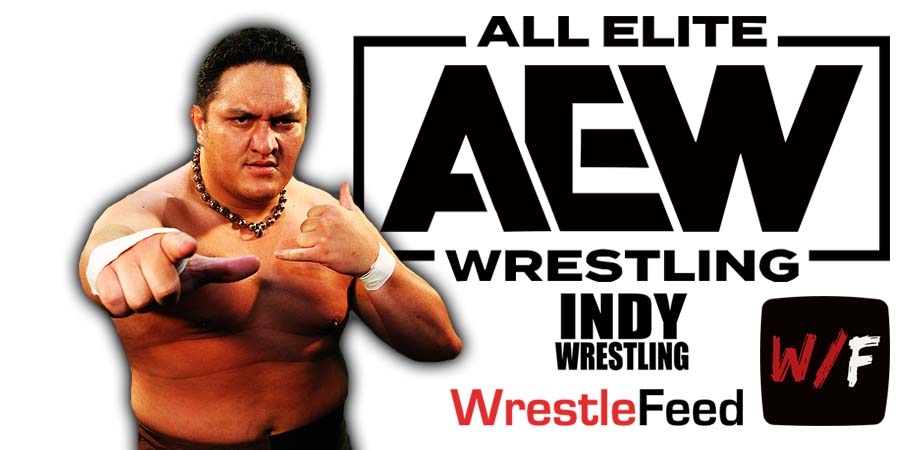 After the match, Satnam Singh (age 26) made his debut in All Elite Wrestling and attacked Joe.

Majority of the AEW fans didn’t like how Satnam debuted, especially the lights going off part.

During an interview with The New York Post, Joe had the following to say about fans criticizing this debut segment:

“I think hemming and hawing over minor things like that is ridiculous.

I understand people have their opinions and feel a certain way about it, but I personally think it’s silly to sit here and continue to harp on it.”

On the other hand, AEW President Tony Khan agreed with the fans and said he could’ve done it better.

Below is what Khan said on Busted Open Radio:

“I could’ve done it better. It’s like – You know, it’s one of those things. I wish I had done it a little differently because the fans are always gonna be right.

And, to be honest, it wasn’t my idea to turn the lights out but I am the ultimate filter. I’m the person who everything goes through. I put the outline of the show together and when I came in Wednesday I thought it was the best outline I’ve ever put together. One of them, at least.

It…was as much strong wrestling as you could possibly fit into the program and I thought up until that point the show was excellent.

And then, that was the one thing we kinda went off on. People might not have liked it. Satnam is an important person for us. It was important to debut him in a meaningful way at the end of the show. With Jay Lethal he’s gonna be a force to be reckoned with. At the same time, turning the lights out for somebody people didn’t recognize – it’s a great point.

And to be honest, when – well, the person who brought up turning the lights off has over 30 years of experience in pro wrestling, and when they brought it up to me I was only looking at the pros and I should’ve thought about the cons because that is my job as the person who decides what goes in and who filters out these ideas.

We had all these people in the room and somehow not one person, when that idea came up, brought out the negatives. And then, when we did it, all of a sudden all the negatives were very obvious.

I should’ve seen the negatives before we did it. And I really didn’t see them until it actually happened. And then I was like, ‘OK, sure’. But that’s not Satnam’s fault. It’s definitely not Jay Lethal’s fault. And so, at the same time, I’m very excited for it. I think it created a lot of buzz.

Satnam’s debut has been the most-watched thing out of the show and frankly, it’s gotten international attention I wanted it to get. But I didn’t want it to loom over a lot of great stuff on the show either and I don’t think it has or it will because there was a lot of great wrestling on that show. So I’m really excited about that.

But the fans are always gonna be right. So, like, I think it’s one of those times where I appreciate what their feedback was and now, as I am in my third year of doing this, I would not do that way again. And these are the things you learn going into year three that I would do differently in year four or five.”

Tony also exchanged tweets with fans on Twitter regarding this. You can read it below:

Fan 1: All I know is literally all of us have the same amount of booking experience as you did when you started AEW. You aren’t ready for that conversation though.

Tony: Yeah and that’s why I am the first to say the fans are always right, and that this is a great example that the fans know what they’re talking about.

Fan 2: Some people will be mad at this but also complain Tony Khan doesn’t listen to experienced people he hires.

Tony: Yep I said I came to tv with a show outline, then heard out ideas on such details & I picked the wrong one. I’m amused anyone says I threw someone under a bus to say the idea was from someone of 30 years experience. Who did I throw under this bus exactly? Where’s the mystery bod?

Fan 1: No Tony. That’s why you need to hire a booker that’s DONE THIS BEFORE!!!!

Tony: You need to hire this ratio.

Also Read: “I’m not making this up” – Tony Khan On Hiring IT Experts To Investigate Anti-AEW Propaganda

While he did not win any championships during his time in ECW, his memorable rivalry against his (kayfabe/storyline) brother Ian Rotten, won Pro Wrestling Illustrated’s “PWI Feud of the Year” in 1995.