Below are the stats for the top 3 men in this list: 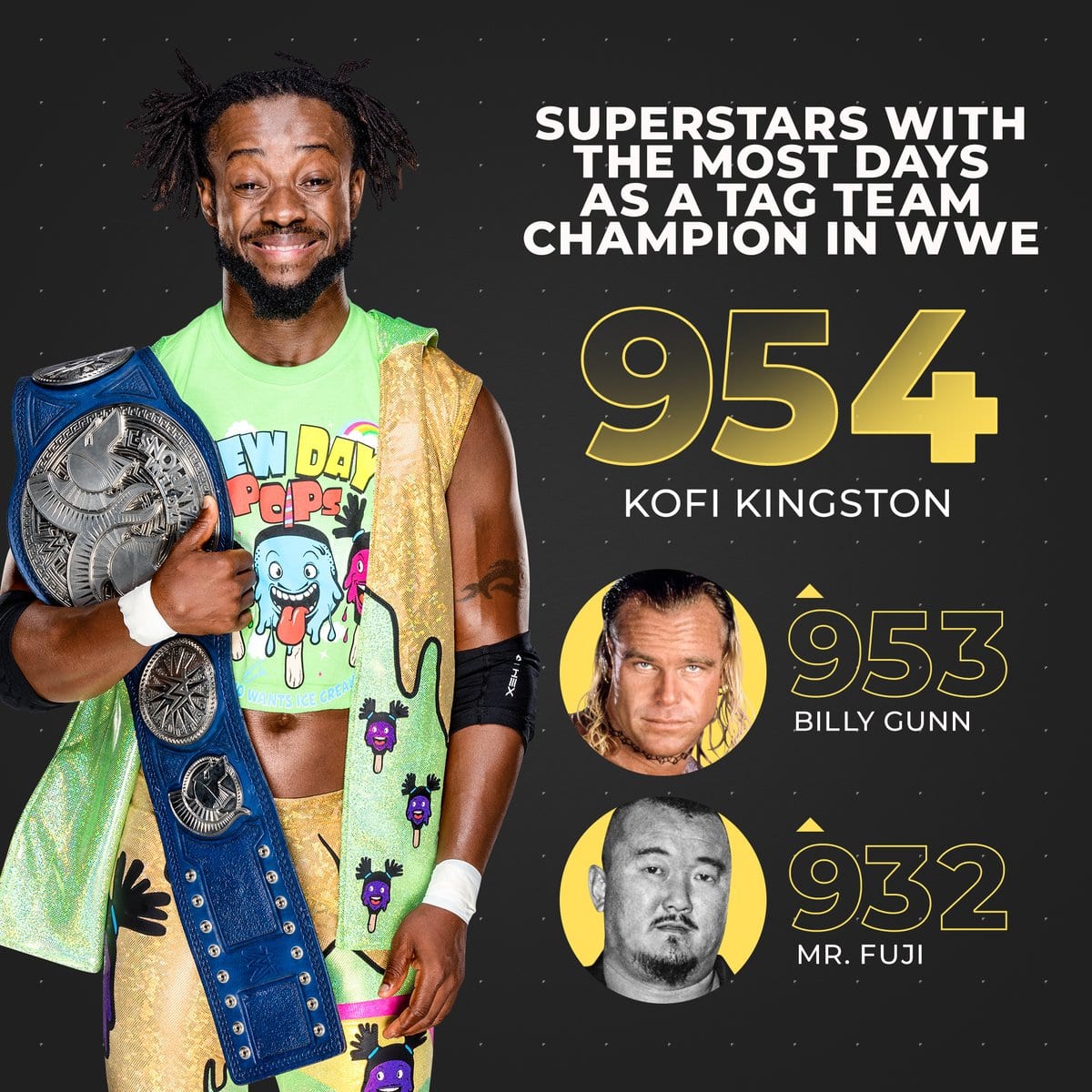 Kofi is currently in the 8th Tag Team Title reign of his WWE career.

“Kofi Kingston reached another milestone in his amazing career today when The New Day member became the longest-reigning Tag Team Champion in WWE history with 954 cumulative days as a titleholder.

Today, Kingston surpassed Billy Gunn — who held Tag Titles for 953 days as part of The Smoking Gunns, The New Age Outlaws and Billy & Chuck — and he recently topped WWE Hall of Famer Mr. Fuji — who held the World Tag Team Titles with Professor Tanaka and Mr. Saito for 932 days.

Kingston is an eight-time Tag Team Champion, with five of those reigns coming alongside Big E and Xavier Woods. His other tenures with the championships were with R-Truth, CM Punk and Evan Bourne. The New Day also hold the record for longest Tag Team Title reign of all time at 483 days.

Below is what his New Day partner Big E tweeted about this accomplishment:

.@TrueKofi has the most days as a tag team champion in the history of WWE. Never failed a drug test. Never had a brush with the law. Always a professional to the highest degree. Give this man his flowers while he can still smell them.

Speaking of Big E, below is what WWE posted about his match on tonight’s SmackDown Live:

“Last Tuesday on SmackDown LIVE, The Bar got one up on SmackDown Tag Team Champions The New Day, as Cesaro defeated Kofi Kingston in singles competition. The champions will get an opportunity to even the score this week, as Big E goes one-on-one with Sheamus.

What will happen when these two powerhouses collide inside the squared circle? Can Big E outmuscle The Celtic Warrior, or will Sheamus show that The Bar is ready for their title match at WWE Super Show-Down?”

I met Sheamus in 2009. I was 23 & he was significantly older. Although he was on the main roster, he used to come down to FCW to bully the new kids & hear the boys tell him how great he is. In those days, it violated wrestling etiquette to swing on him. Etiquette be damned.

In this fairytale I see you scribing this tweet a with quill, wearing a smoking jacket, and surrounded by many leather bound books. Any more from Big E’s BS Stories of Yore? https://t.co/gBGAWGmpDw