On this day in 2014, we lost Old School WWF Legend The Ultimate Warrior (Real name: Jim Hellwig) at the age of 54 due to a heart attack caused by atherosclerotic cardiovascular disease.

Warrior won the WWF World Heavyweight Championship when he defeated “The Immortal” Hulk Hogan in the main event of WrestleMania VI, and is still remembered as one of the biggest draws in professional wrestling history.

In 2014, he was inducted into the WWE Hall of Fame by Linda McMahon.

WWE Hall of Famer Sunny was released from jail earlier this year.

She was originally scheduled to be released on March 25th, but got released early from the Carbon County Correctional Facility in Pennsylvania.

Sunny was incarcerated last year because of the following:

– Open container and consuming alcohol in a motor vehicle

– Driving with a suspended license

Sunny’s latest DWI was her 6th in the last 4 years.

Sunny is now back to posting revealing photos of herself for the fans, in return of money.

Good morning!!! My CORONA VIRUS SPECIAL is still up and running for my SNAPCHAT MEMBERSHIP!!! Be a part of my PREMIUM SNAPCHAT while you're stuck in the house with nothing to do!!! Email me at [email protected] for all the deetz! Here's what you've been missing… pic.twitter.com/3GZBLXpaVf

Email me at [email protected] to find out how to become one of my PREMIUM SNAPCHAT MEMBERS and join us in all the sexy fun!!! pic.twitter.com/YQTLVcUMgz

However, some fans began annoying Sunny and this led to her posting the following on Facebook:

“If I get one more email asking me to ‘meet up’ or ‘date’ for money, I swear I’m gonna get the Coronavirus in one of those t-shirt shooters and spread it to all of them…

Just because I’m famous doesn’t mean I’m an escort. You must have me confused with Ashley Massaro…. and she doesn’t do it anymore….” 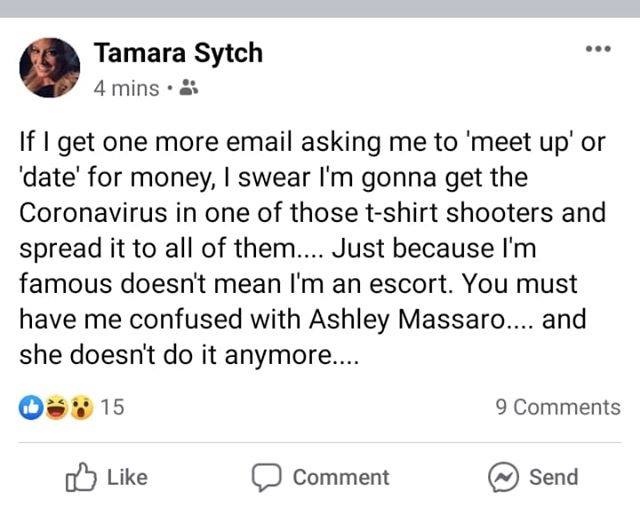 For those who don’t know, Ashley passed away in May 2019 at the age of 39. Her cause of death was suicide by hanging.