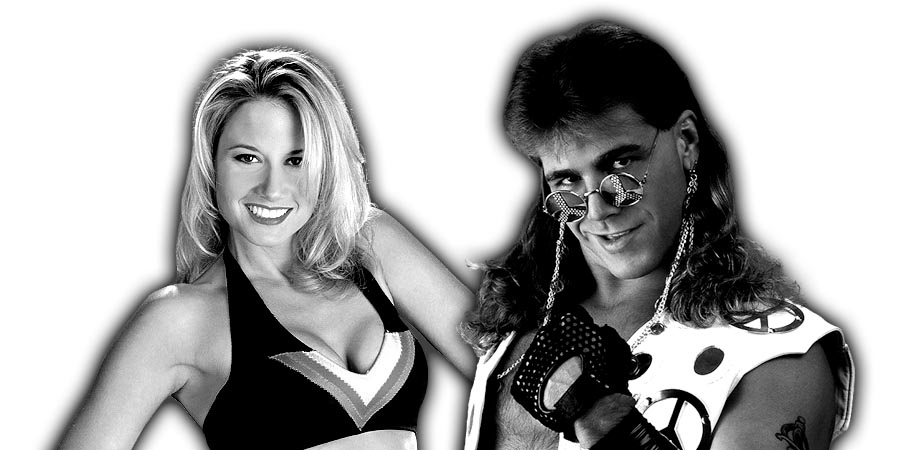 One night we had a skit to do together. He was going to be in the ring when a bunch of heels hit to take him out. He was to fight each one of them off and then call me into the ring. I was supposed to get in the ring like a shy schoolgirl, and he would motion to me to pucker up, like he was going to kiss me. He would then turn away and “diss me,” as the live TV show went off the air. After we faded to black, he was to turn around, grab me, and kiss me, much to the crowd’s delight.

So it was time. I’m ringside and he calls me into the ring. I walk over to him, he turns away, turns back and grabs me and dips me. He laid the hottest, sexiest, wettest kiss I had ever experienced, right there in the center of the ring. As he was kissing me, which felt like five minutes and was probably darn close to that, he laid me down on the canvas and CONTINUED to kiss me (and dry hump me a little as well.)

I gotta tell you – it was GOOD … and I LOVED it! I didn’t want it to end, and the Crowd loved it more! They were howling like Wolves, and I can bet you the women in the audience were wishing it was them.

Call me crazy, but I felt sparks during that kiss. OK, I felt friggin’ fireworks!

I mean, come on! It was the “Heartbreak Kid,” for Cryin’ out loud! The most beautiful man I had ever seen!

The next week at TV, I was standing by the curtain watching the show, as we all usually do, and Shawn walked up behind me to look and watch over my head. As he inched closer and closer to me, I could feel his hot breath warming the hairs on the back of my neck.

“Do you feel that?” he whispered.

The “that” he was referring to was his hard di*k pressed firmly up against my as*. Oh yes, I felt it all right. Good and hard.

Instantly, I was turned on. I was moist. What red-blooded American girl wouldn’t have been when the “Heartbreak Kid” pushes his erection up against you and gives you chills with his breath?!?

I had a pretty good idea where this was going, and what his intentions were. And I was right. Later that evening he pulled me into an empty locker room and kissed me. And felt me. And groped me. And then, like a kid in high school, he f***ed me.

Yep, he banged me good, right there in the locker room.

It was so dirty and sexy and so not allowed within the crew that it made it even hotter.

Oh my God! It was mind-blowing $ex!

And that was the beginning of the love affair that would eventually lead to my first broken heart-ever.”