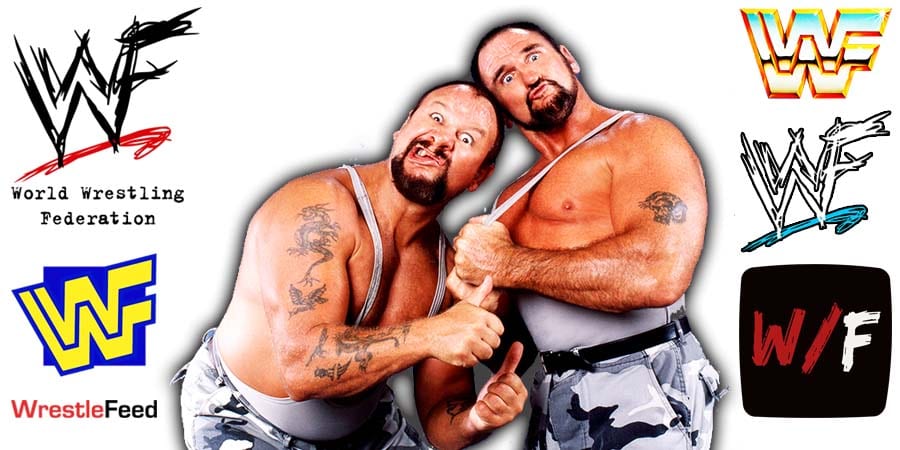 • The Bushwhackers Are Making A Comeback

WWE Hall of Famers The Bushwhackers are taking bookings again! Below is the press release that they sent out:

“The Bushwhackers are back together.

Ladies and Gentlemen, this is the moment you’ve been waiting for. The Bushwhackers, also known as The Sheephearders and Los Pastores, are back together. The news was confirmed today by Bushwhacker Luke Williams on his Facebook Page.

For the first time in 20 years, the WWE Hall of Famers, Luke Williams and Butch Miller, considered by many experts as one of the best tag teams of all time, are back formerly back together.

The 35 time tag team champions are now available for bookings all around the world. Just for this year, promoters will be able to book The Bushwhackers as a tag team for any wrestling or non wrestling related events, Meet & Greets, Virtual Meet & Greets, seminars, online seminars, wrestling seminars, promote your business or product, conventions, commercials, special appearances and any other activities.

The Bushwhackers started teaming back in their native New Zealand as The Kiwis back in 1966. They wrestled together for 35 years.

Butch was forced to retire as an in-ring competitor in 2001 after a neck injury and moved back to New Zealand. Luke Williams is still an active wrestler in 2021.

They only had 3 appearances together since they separated on 2001, including the WWE Hall of Fame induction on 2015. But this will be the first time in 20 years The Bushwhackers formally reunite and have a tour together.

To all the promoters worldwide, they will only be available just for 2021. Contact them at: “[email protected]” and they will make sure you can have The Most Violent Tag Team in the history of Pro Wrestling in your show, or depending on the request, The Good Fellas that will lick everyone’s heads as a greet.

On this day in Pro Wrestling history on January 29, 2012, World Wrestling Entertainment aired their annual ‘Royal Rumble’ event LIVE on PPV from the Scottrade Center in St. Louis, Missouri.

The winner of the Royal Rumble match earned the right to challenge either the WWE Champion or the World Heavyweight Champion for the title in one of the main events of WrestleMania 28.