– The Barbarian & Shaska Whatley vs. The Italian Stallion & Jim Dawson

As seen in the main event of WWE Super ShowDown 2019, The Undertaker defeated Goldberg.

The match ended when Taker chokeslammed Goldberg and pinned him in the middle of the ring. The match lasted almost 10 minutes.

During the match, the Jackhammer from Goldberg on The Undertaker was actually turned into a Brainbuster and Taker was dropped on the back of his head.

According to Slice Wrestling, Undertaker and Goldberg had a verbal argument backstage after their match as Taker wasn’t happy with how the match ended and how Goldberg did some of the spots.

Below is what Goldberg tweeted after the match:

Knocked myself out and thought I could finish…. love my fans…..but let u down. Everyone else that found “pleasure” ….. hope ur happy

Apparently The Undertaker doesn’t want to wrestle anymore as he seems to agree with a fan who commented the following on Instagram and The Undertaker went on to like it:

“Can you please stop bringing Undertaker back now? Jesus Christ after everything he’s done for the company just let him retire in peace. Literally, the match was terrible because those two guys are in their 50s, they can’t compete at Main Event level anymore. You saw how Undertaker was struggling to stand after just 5 minutes, and Goldberg was too weak to even pull off a Jackhammer. Just let them live out the rest of their days in peace, or they’ll end up getting seriously hurt.” 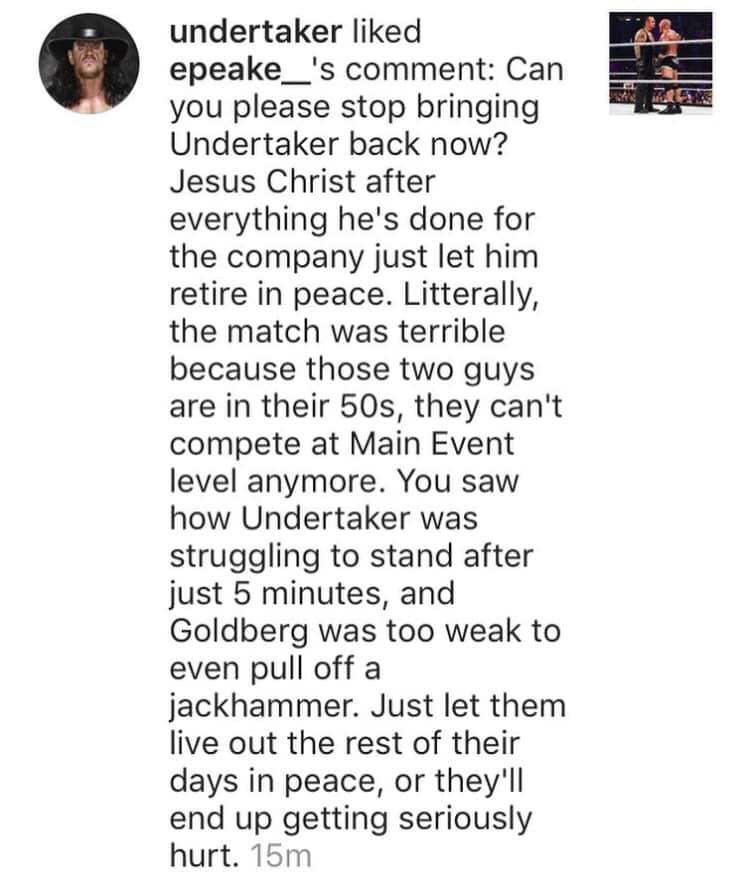