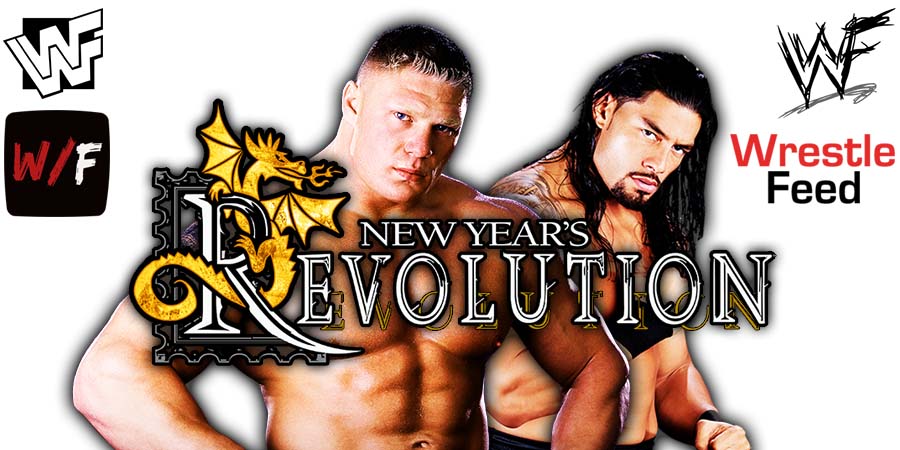 This Saturday night on January 1, 2022, the WWE Day 1 pay-per-view will take place, and the main event is scheduled to be Roman Reigns defending the Universal Championship against Brock Lesnar.

Due to the recent COVID-19 outbreak in WWE, Roman didn’t work the recent WWE Live Events, which could either mean he tested positive, or WWE simply doesn’t want to put his health at risk (given his health history) and want him to be at his 100% for this weekend’s PPV and the upcoming WrestleMania 38 season.

According to the Wrestling Observer, this Universal Title match is very important for WrestleMania 38 plans and it needs to happen this Saturday night:

“I was essentially told it was very, very important for WrestleMania that Roman Reigns, Brock Lesnar and Paul Heyman do not miss this show. So, obviously there’s something big going on there.”

It was also reported that Paul Heyman could be double-crossing Lesnar at this pay-per-view.

Reigns recently fired Heyman as his special counsel, after Heyman tried to protect Roman from Brock, but that entire scenario could actually just end up being a swerve.

Here’s what the Observer reported:

“There are different ways they can go, including a Lesnar title win to set up a WrestleMania rematch, or Lesnar on the verge of winning and it comes out that the Heyman firing was a ruse and he double-crosses Lesnar.

The idea should be what is the best way to build WrestleMania. It also could be that a Heyman double-cross of Lesnar could be saved for WrestleMania.”

Also Read: WWF Legend Laid Out His Classic WrestleMania Match Based On A School Fight He Saw

First, he was known on WWF TV as “Leaping” Lanny Poffo in 1985, but later evolved into a manager called The Genius, who would also wrestle in matches from time to time, while managing the likes of Mr. Perfect & The Beverly Brothers.