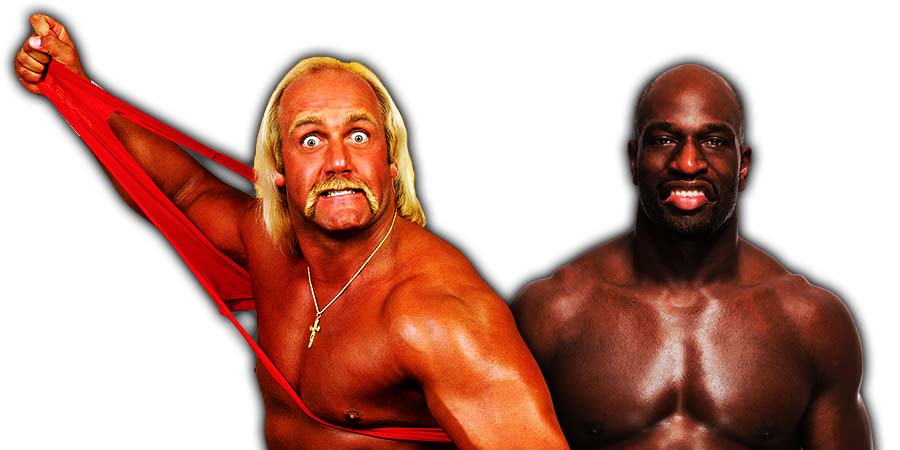 Joseph Peisech of No Holds Barred podcast revealed that a source told him that RAW wrestler Titus O’Neil wasn’t happy when he saw Hogan backstage at Extreme Rules.

Hogan approached Titus, offered a handshake and tried to talk to him, but Titus didn’t shake his hand, packed his bags and left the event.

Titus has now responded to these reports and noted that they are false. Titus issued a lengthy statement regarding what exactly happened backstage at Extreme Rules and how he feels about Hogan.

Below is the statement:

“To my gracious fans and the WWE Universe.

The reports and rumors concerning my boycotting “Extreme Rules” in Pittsburgh is false and inaccurate. I was not scheduled to attend or be a participant in the “Extreme Rules” match/production and was otherwise not booked for the show.

The talent present in Pittsburgh, which I was a part of, was asked to attend a mandatory meeting in which Mr. Terry Bollea addressed everyone and informed the same that he would be reinstated into the WWE Hall of Fame. At no point during, after or otherwise did I make any scene concerning Mr. Bollea’s communication to the talent. In addition, let it be known that I did not refuse to shake Mr. Bollea’s hand; we did not have any type of one-on-one interaction whatsoever that would or did necessitate any exchange between us individually.

As to the reinstatement of Mr. Bollea, I can only communicate that I am a proponent of second and even third chances for individuals that show true remorse, acknowledgment of wrongdoing, fulfill their punishment, if applicable, and otherwise put forth sincere efforts to correct the issues.

Unfortunately, I must echo the sentiment and dissatisfaction expressed by many of my fellow contemporaries concerning Mr. Bollea’s apology and its lack of true contrition, remorse and a desire to change. Mr. Bollea’s apology “that he didn’t know he was being recorded” is not remorse for the hateful and violent utterances he made which reprise language that has caused violence against blacks and minorities for centuries.

I stand firm in my position that Mr. Bollea is entitled to reinstatement; he was and is a role model, hero and icon to countless people. I hope that Mr. Bollea’s missteps in communicating to the WWE talent in Pittsburgh are not repeated to his fans and I expect that he shall pursue an agenda that clearly communicates to all third parties that his language was inappropriate, wrong and should not be tolerated in a civilized and society. As the father of two young black men, I have spent their entire life and the majority of my adult life with a singular focus; being a role model for my children and young black boys and girls. I take tremendous pride in my charity work and the community outreach programs that I have fostered via the platform I have been given. I teach my sons love and tolerance for everybody, but I also teach them to operate in truth and respect.

I hope this clears up any confusion. I, like New Day, will continue to use my platform to positively affect, entertain, embrace, celebrate and love people from all backgrounds both inside and outside of the WWE Universe.

The New Day (Kofi Kingston, Big E & Xavier Woods) also issued a statement regarding how they feel about Hogan’s reinstatement.

“To the WWE Universe and whoever else it may concern:

This will be the only statement we will make regarding Hogan’s reinstatement into WWE’s Hall of Fame. We do not wish to spend the energy debating the point, because between our kids, our external ventures, and this job, our energy is spread thin enough already, lol.

We are only writing this simply to provide an answer to the many who have bombarded us with questions on where we stand on the issue.

We preface this statement by emphasizing that this is our own opinion and may not necessarily reflect the opinion of anyone else affected.

How do we feel? Indifferent. We are not happy, or sad, angry or resentful. Who WWE puts into the HOF is totally and completely up to the company and from a career standpoint, there is no argument on whether or not Hogan should have his place. We have no problem with his re-induction in the slightest degree. It is impossible to even begin to mention the history and evolution of the business without mentioning his name and accolades.

On a personal level, when someone makes racist and hateful comments about any race or group of people, especially to the degree that Hogan made about our people, we find it difficult to simply forget, regardless of how long ago it was, or the situation in which those comments were made. But we also do not respond with more feelings of hate. Instead, we just do not associate with the people who convey or have conveyed this negative and hurtful mindset. This instance will be no different. Perhaps if we see him make a genuine effort to change, then maybe our opinion will change with him. Time will tell.

Through the course of our lives, people have used racist comments towards us and it doesn’t feel good. But if we stopped moving forward every time we were met with prejudicial hatred, then we would have never achieved our current accomplishments.

We know we are worth it, we know our kids are worth it, and most importantly, we know that
people that look like us are worth it and always have been. There isn’t a person on this planet who will be ever be able to say anything to make us think otherwise because we believe in ourselves as a people and don’t need anyones approval on that, regardless of who they are.

Having said that, his reinstatement won’t change anything for us. It will have zero effect on our ability to perform or the level of effort we will put into doing what we love to do, and that is: To deliver an entertaining product each week for our fan base.

“Never trade your authenticity for approval.”