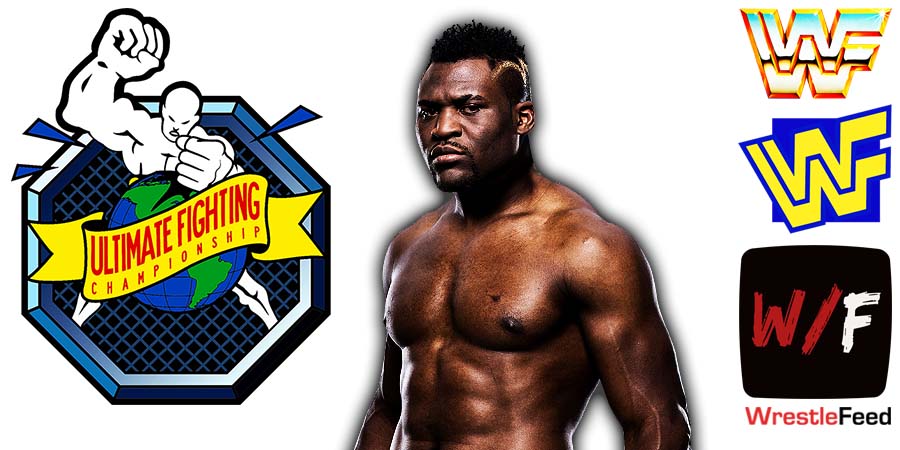 During a recent interview with Trevor Noah, Ngannou talked about being friends with WWF Legend The Rock, and how The Great One motivates him.

Here’s what The Predator said:

“I always look up to somebody like ‘The Rock’ Dwayne Johnson and recently, he noticed me, and now we even chat. I text, and ‘The Rock’ texts back, and sometimes, he left me a voicemail.

And then, when I wake up someday, just listen to it – ‘The Rock’ voice message. You know, I’ll go out there that day. I work double of what I supposed to work.

I am just motivated. I am like, ‘Damn! ‘The Rock’ just left me a message. This is it.’ You know, the enthusiasm, the motivation of that just message, you know.

And then I realize how great is it to be in the position that you have that power to, like, maybe just talk to somebody and change his day or his life. And I want to be the same thing for others.

Basically, knowing where I came from, that’s what we need. We just need hope.”

You can watch Ngannou’s best knockouts below:

Also Read: The Rock Announces Historic Partnership With The UFC

This episode was pre-taped at the Lowell Memorial Auditorium in Lowell, Massachusetts and featured matches, promos & storyline segments on the road to the ‘WWF Royal Rumble 1994’ PPV, that happened later on the same day.