Below is what Jericho said regarding why he decided to return to New Japan to face Omega:

“I like doing stuff that’s never really been done. I think I’m in a very unique position in the WWE where I have a great relationship with the company, one guy specifically, where normal rules might not apply. But I also do it with respect and with relevance to what they’re doing and realize that WWE is still my company, it’s still my home, but I’m not handcuffed to WWE.

If I want to go to New Japan to work a main event at the Tokyo Dome or put on my own cruise and work in tandem with Ring Of Honor, that’s OK, because guess what? At the end of the day, when I go back to the WWE it makes me that much bigger of a star.

I’m not saying it’s a Brock Lesnar-type thing, but it is very much a mercenary-type thing. It’s an old-school, something that you would see Hulk Hogan or Ric Flair or Nick Bockwinkel or somebody do back in the 80’s when they would do a big shot in Japan just because it meant something.

I’m not a world champion, but it’s a big deal for Jericho to go there and I love that sort of intrigue and I think certain guys in the WWE appreciate that as well in the office because it makes for a better business. The good thing about New Japan and even Ring Of Honor to an extent is showing that WWE is not the only place in town, and I think the first people that would be happy about that are the guys that are running the WWE because it just makes for a better business, for a healthier business.

And not just for the boys but for the fans. It pushes everybody to think more and to be more clever and creative and to work harder.”

– Braun Strowman Rises Out Of The Hole In The Ring

Below is the video of “The Monster Among Men” Braun Strowman rising out of the hole in the ring after bodyslamming Kane through it:

You can watch their match below:

As seen on this week’s episode of Raw, “The Big Dog” Roman Reigns made his return to WWE programming. You can watch it below:

– Video Of Goldberg & The Undertaker Talking Backstage At WrestleMania 33

On Goldberg’s WWE 24 Documentary on the WWE Network, a video of Goldberg & The Undertaker talking backstage at WrestleMania 33 was shown. You can watch it below:

Below is a shot of The Undertaker backstage at WrestleMania 33: 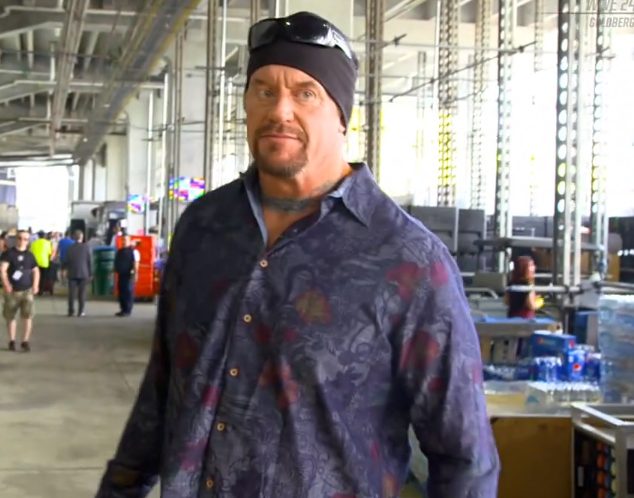