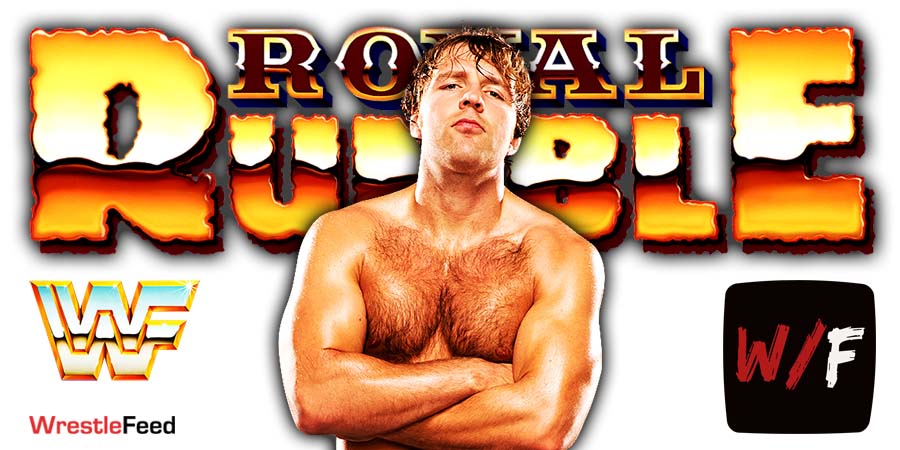 WrestleVotes then went on to report the following:

“Had more than 1 source this weekend, w/o me directly asking, state they believe WWE will try for an ‘unexpected’ forbidden door entrant for the Men’s Royal Rumble.

Personally I’m skeptical it happens, but I can confirm WWE is at least open to the idea. Which is exciting enough.”

This led to fans speculating that someone from AEW could show up, especially someone like Chris Jericho, who even appeared on Steve Austin’s Broken Skull Sessions on the WWE Network last year while being under an AEW contract.

On last week’s episode of SmackDown, Dean Ambrose (now known as Jon Moxley in AEW) was shown in the Roman Reigns vs. Seth Rollins video packages as part of The Shield.

This began even more speculation of Ambrose somehow getting involved in the Universal Championship match between Reigns and Rollins at the Royal Rumble.

According to the Wrestling Observer, AEW will have no involvement at Royal Rumble 2022, and Moxley isn’t scheduled to return to WWE for a one-off appearance.

On this day in 2003, we lost Old School Wrestling Legend “The Original Sheik” The Sheik (Real name: Edward Farhat) at the age of 78 due to heart failure.

He used to be the promoter of NWA Detroit (aka Big Time Wrestling) from 1964 till the promotion closed its doors in 1980.

His last major TV appearance came in 1995, when he managed his nephew Sabu on WCW Monday Nitro.