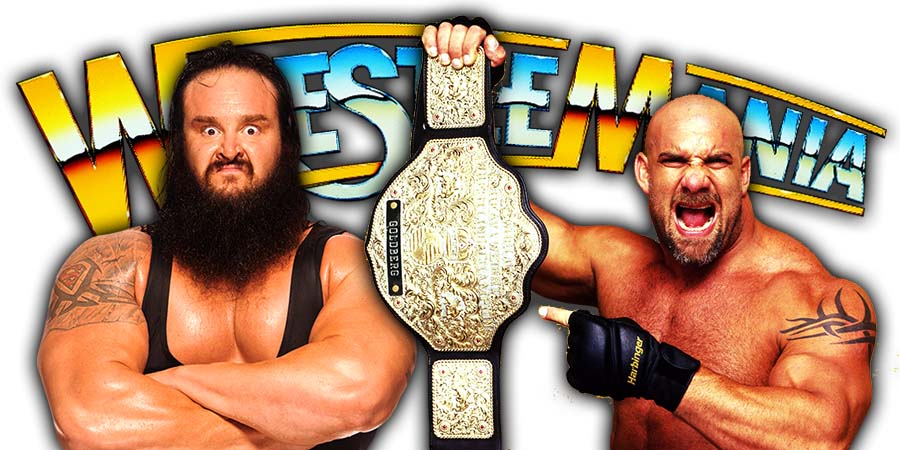 Up next is Seth Rollins vs. Kevin Owens.

After back & forth action, Owens wins the match via DQ after Rollins hit Owens with a ring bell.

Owens cuts a promo after the match and says this doesn’t end this way. Owens says Rollins calls himself a WrestleMania God, but these are the actions of a little b*tch.

Owens then challenged Rollins to a No DQ match and they are fighting again. Rollins lays out Owens after hitting him with the Steel Steps.

Owens climbs on top of the WrestleMania sign and hits an Elbow Drop on Rollins through the announce table!!!

Owens hits a Stunner on Rollins to get the pinfall.

Kevin Owens def. Seth Rollins in a No DQ match

After this, we go to Rob Gronkowski and Mojo Rawley. 24/7 Champion R-Truth arrives and this leads to Rob trying to pin Truth.

However, Mojo pulls away Rob and pins Truth himself to win the 24/7 Championship!

Up next is the co-main event of the evening and it is for the Universal Championship!

Match begins and Strowman picks up Goldberg, but Goldberg nails 3 Spears on Strowman.

Goldberg goes for the cover, but Strowman kicks out. Goldbergs hits another devastating Spear!

Goldberg goes for the Jackhammer, but Strowman counters and hits 4 Powerslams to defeat the WWE Hall of Famer!