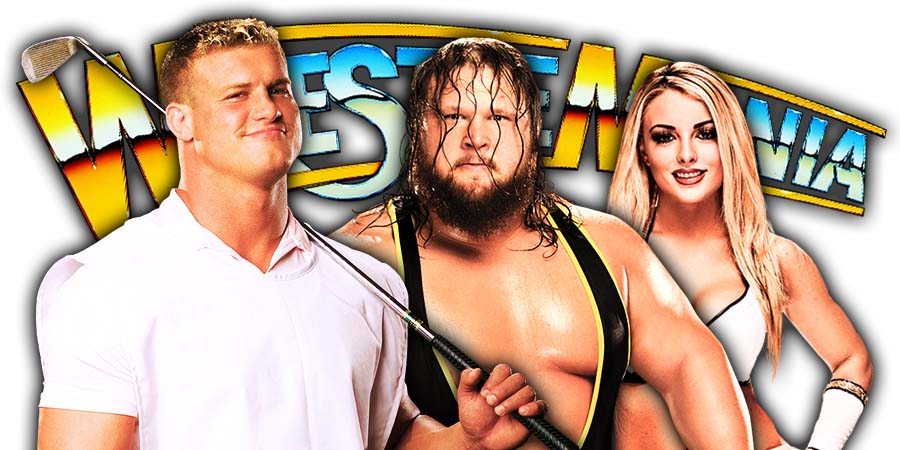 Up next is a RAW brand match – Aleister Black vs. Bobby Lashley. Black makes his way out first, followed by Lashley (accompanied by Lana).

.@WWEAleister soars to take down Lashley!

After back & forth action, Black lays out Lashley with a Black Mass to win the match.

SmackDown Women’s Champion Bayley and Sasha Banks get interviewed backstage and Sasha says people will have to see what she does tonight.

Rob Gronkowski gets interviewed after this and Rob guarantees he’s going to win the WWE 24/7 Championship tonight (Mojo Rawley pushed away Rob and pinned R-Truth last night to win the 24/7 Title).

Up next is Dolph Ziggler vs. Otis. Ziggler makes his way out first and Sonya Deville is accompanying him.

Otis makes his way out next and he’s alone. Otis rushes into the ring and Ziggler immediately leaves.

Otis dominates Ziggler and Sonya tries to interfere. Ziggler takes advantage of this and hits Otis with a low blow.

Mandy Rose then comes out and slaps Sonya. Mandy then low blows Ziggler!

Otis then pins Ziggler to win the match after hitting his finisher.

Otis then lifts Mandy and they both kiss. You can watch it below:

.@otiswwe and @WWE_MandyRose save the day!