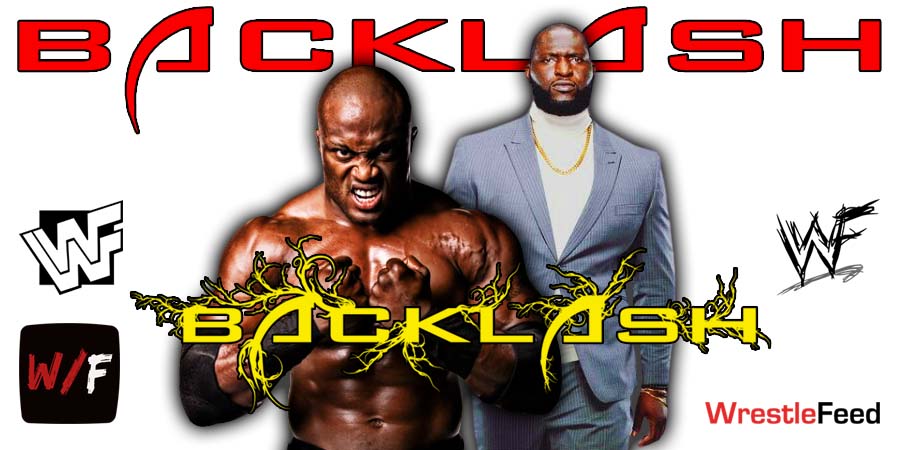 – Edge vs. AJ Styles (Damian Priest is barred from ringside)

There was no match on the Kickoff Show.

The main show begins with the WrestleMania 38 rematch between Cody Rhodes and Seth Rollins.

After back & forth action, Cody nails a big superplex on Seth from the top rope.

Both men start trading lefts & rights. Cody then clotheslines him out of the ring and jumps on him from the top rope, but Rollins gets out of the way.

Action returns to the ring and Cody hits a Cody Cutter on Seth and goes for the cover, but Seth kicks out.

Seth hits a Buckle Bomb followed by a Splash! He goes for the cover, but Cody kicks out.

Rollins goes for the Phoenix Splash, but Cody gets out of the way and hits a Superkick. Cody goes on the top rope, but Rollins catches him up there and hits a superplex. He then goes for another suplex, but Cody counters and hits the Cross Rhodes! Cody goes for the cover, but Seth manages to reach the bottom rope.

Cody goes for a Moonsault, but Seth moves out of the way. Seth hits a Pedigree on Cody and goes for the cover, but Cody kicks out!

Seth mocks Duty Rhodes and Cody hits him with a Cross Rhodes. Cody goes for the Vertebreaker, but Seth counters and tries to pin him by holding the tights. Cody counters and holds Seth’s tights to pin him.

Up next is another WrestleMania 38 rematch – Bobby Lashley vs. Omos.

Omos makes his way out first with his new manager MVP. Omos is announced as The Nigerian Giant. Out next is The All Mighty.

Omos picks up Lashley and says that the 273 lbs former WWE Champion is small.

Omos hits an Undertaker combo on Lashley, where he picked him up, hit him with snake eyes, followed by a big boot!

Lashley stucks up Omos’ arms in betting the ropes and begins punching his head.

Bobby tries to lock in the Hurt Lock on MVP on the outside, but Omos stops him.

Lashley locks in the Hurt Lock on Omos, but Omos manages to break out of it.

Bobby is looking to suplex Omos, but Omos counters. Lashley hits a Spinebuster on Omos.

Omos sends Bobby shoulder-first into the ring post through the ropes. MVP hits Bobby in the face with his stick.

Omos then delivered a double-handed chokeslam to Lashley and pinned him.