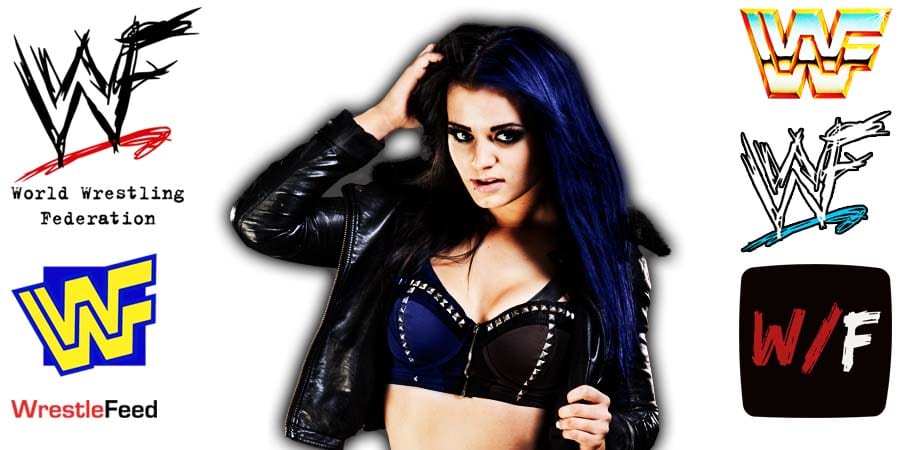 Former Divas Champion Paige announced on Twitter that she will leave WWE next month when her contract expires.

July 7th will be the last day with WWE. I’m so thankful and I appreciate the opportunities that the company has given me.

I will always be appreciative of the company that took in an 18 year old British pale emo girl that didn’t look like your average diva, giving me the chance of a lifetime and making me feel like a superstar.

I know after my neck injury taking me out of in-ring status, it was pretty hard to keep me around for as long as you did and for that I’m thankful too.

Thank you to the WWE Universe. You guys are the most passionate group of fans I’ve ever seen. Hope you continue to stay on this journey with me.

I think the toughest part weirdly enough is having to let the Paige name go! But Saraya is helluva name. Kudos to my mum for that one.

FYI I’m not saying I’ll never be in the ring. That day will most certainly come again! Wherever the return maybe.

Below is how the wrestling stars reacted to this news:

Zelina Vega: Truly a legendary talent and person. I don’t think she’ll ever know the incredible impact that she’s had on people like me and so many others. My initial opportunity to work in a WWE ring was due to HER story. Honored to call her a friend. This will ALWAYS be.. her house. I love you ❤️

Lana: I love you so much. Thank you for everything you taught me about wrestling. Thank you for breaking glass ceilings for women & inspiring the next generation of humans to chase their dreams no matter what gender, race or sexual orientation they are. ❤️ forever. #ThankYouPaige

Lance Storm: All the best in what ever lay ahead.

Billie Kay: Thank you for everything ❤️

Renee Young: I love you!! You were always one of the absolute bright spots in my time in WWE. Never met someone that was so much of an instant bonafide star. Can’t wait for what the world has to offer you! 👩🏼‍🎤👩🏼‍🎤

Also Read: Paige Reacts To Fans Saying She’s Not Coming Out Of Retirement Because She’s Lazy

It was taped at the HSBC Arena in Buffalo, New York and featured matches, interviews & storyline segments on the road to the ‘WWF King of the Ring 2000’ PPV.