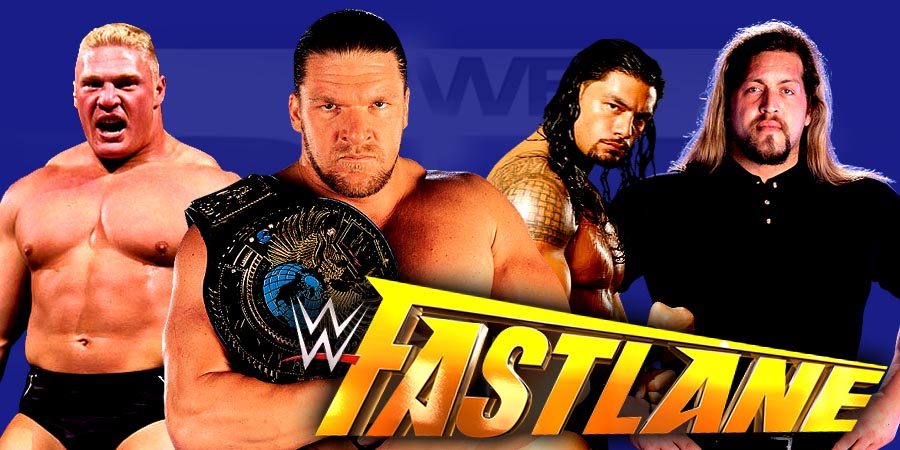 Tonight’s WWE Fastlane 2016 PPV is airing live from Quicken Loans Arena in Cleveland, Ohio and is the final PPV before WrestleMania 32.

What a way to kick off #WWEFastlane as @SashaBanksWWE and @BeckyLynchWWE form their own #UNITY for the victory! pic.twitter.com/vSaBTqWrLK

Up next is Intercontinental Title match between Kevin Owens & Dolph Ziggler.

"Who's gonna be the last man standing? I'M gonna be that man!" – @WWERomanReigns #WWEFastlane pic.twitter.com/L4Vs3SCDyA

"[My trip to @WrestleMania] is already BOOKED! I got a great deal on @priceline!" – @TheDeanAmbrose #WWEFastlane pic.twitter.com/trqjt2Gcxs

Up next is the rubber match between AJ Styles & Chris Jericho.

This was just a filler segment to promote Edge & Christian’s new show on the WWE Network, which debuts tonight after Fastlane 2016.

Up next is the main event Triple Threat match. Dean Ambrose comes out first, followed by Roman Reigns. Reigns is already getting booed. Out comes Brock Lesnar to a big pop.

The match starts with Lesnar dominating everyone with suplex after suplex.

Ambrose & Reigns are clearing the announce table and it looks like the Shield brothers are looking to double powerbomb Lesnar through the table, and they do it!!!!

Lesnar is back in the ring and suplexes Reigns, and Ambrose who was on Reigns’s shoulder goes flying out of the ring.

Reigns hits Lesnar with a spear but Lesnar locks in the Kimura Lock on Reigns! Reigns lifts Lesnar while the lock is still locked-in. Ambrose comes in the ring with a chair and attacks Lesnar with it. Ambrose then hits Reigns with it as well.

Reigns hits the spear on Ambrose to win!

He will now face Triple H for the WWE World Heavyweight Championship in the main event of WrestleMania 32.

Triple H comes out after the match and both men are face to face. Fastlane 2016 goes off the air with Triple H posing with the WWE World Title.