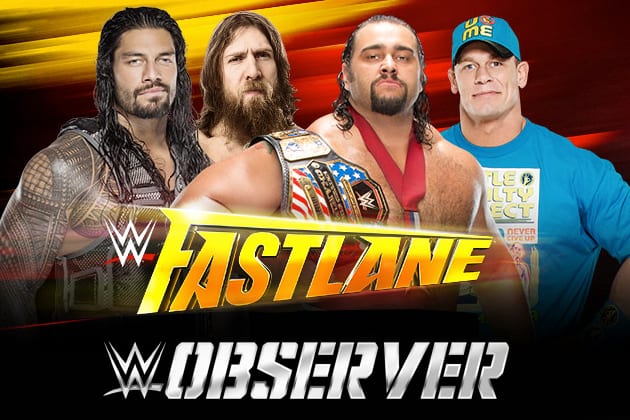 Ziggler & Rollins start the match & Ziggler gets the upper hand. “You sold out” chants towards Seth Rollins by the fans. Rowan tags in and shows his power as he lifts Rollins up with one hand with a lock on his other arm. Rollins tags in Kane. Rowan powerslams Kane in an amazing show of strength.

Big Show tags in and works on Rowan. “We want Ziggler” chant from the crowd. Now “Feed Me More” chants from the crowd. Looks like the babyfaces are very much over with the crowd. Rollins tags in. The fans chant for Rowan as Rollins works on Rowan’s leg. Rollins with a neckbreaker off the top rope on Rowan. Big Show tags in and continues to work on Rowan’s leg with a submission move. Rowan gets back and delivers a DDT to Show. Rollins tags in and superkicks Ziggler off the apron while Rowan hits a big boot straight to Rollins’ mouth. Ryback tags in & a big powerbomb to Rollins! Ryback with a meathook clothesline to Kane. Rollins with a superkick to Ryback & goes for the pin but Ryback kicks out. Rollins goes to the top rope but Ryback counters his move and hits the Shellshocked but Big Show interferes. Ziggler tags in and hits Kane with a DDT. Big Show with a KO punch to Ziggler and Kane pins Ziggler.

The Heels are still attacking the faces and Orton returns!! Orton with RKOs to everyone but Rollins escapes.

Looks like this will set up their rematch at WrestleMania 31. Cole mentions that this will bring Cody back to reality. They shake hands and Stardust leaves dissapointed. In a backstage segment with Dusty, Stardust attacks Goldust and Dusty calls Stardust Cody and he becomes mad again and says you killed Cody.

The Usos make their way out with Naomi and Cesaro and Kidd come out with Natalya. Good back and forth action. At one point, Cesaro tried to do the Cesaro swing with one leg! Cesaro goes for the small package but the Uso kicks out at 2. Great combination move by Cesaro and Kidd but Uso kicks out. Tyson goes for the sharpshooter. Uso with the Samoan drop but Cesaro breaks the pin. Cesaro might have suffered a concussion during the match. Tyson locks in the sharpshooter and Uso is in trouble but the other Uso breaks it up with a Superkick. Tyson pins Uso!

We now get a promo for Triple H & Sting’s face to face confrontation.

Triple H comes out first(not in a suit). Triple H talks about his segment with Ric Flair on Monday’s Raw and apologizes to Flair for pushing him down. Triple H talks about standing in the ring as The Game & as the King of Kings! He calls out Sting. Sting’s music hits and out comes Sting in his third ever WWE appearance. He didn’t bring his baseball bat with him. Sting comes face to face with Hunter and we hear some WCW chants.

Triple H talks about putting Sting in the Hall of Fame down the line. Triple H removes his jacket and looks to fight and says we can do this the hard way as well.

Sting attacks HHH but HHH comes back and kicks Sting and delivers series of punches and Sting is down. Triple H shouts that he gave Sting a chance. Triple H goes out and takes out a sledgehammer! Sting comes with his bat! Triple H looks in trouble. Triple H throws his hammer out of the ring and Sting backs down and challenges him for WrestleMania. The crowd chants YES YES YES! Sting points at the WrestleMania sign.  Sting attacks HHH with the bat and Triple H goes down. Sting hits a scorpion deathdrop. Sting’s music hits as he points at the WrestleMania sign!

Paige is out first and we get a video on their rivalry. The Bellas are out next. Paige wastes very little time as she goes after Nikki and takes her down. Nikki takes control of the match as she takes Paige down. Paige gets a little momentum with a dropkick on Nikki. Paige with a superkick. Paige going for the Rampaige but Nikki counters but Paige hits a superkick and goes for the pin but Nikki kicks out. Nikki with a big powerbomb on Paige and goes for the pin but Paige kicks out. Paige tries to apply the PTO but Nikki reaches the ropes and Paige breaks the hold. Nikki pins Paige with a small package.

Here’s an awesome promo for Triple H vs. Sting:

Barrett takes control of the match. Barrett with a big boot and Ambrose falls of the top rope to the outside. “Lets go Ambrose” chants from the crowd and Ambrose gets some momentum and hits a bulldog on Barrett. Barrett goes for the winds of change but Ambrose counters and goes for the small package but Barrett kicks out. Ambrose delivers an elbow off the top rope and goes for the pin but Barrett kicks out. Barrett hits wasteland but Ambrose kicks out of the pin. Barrett pulls his elbow pad but misses the bullhammer and Ambrose connects with a big clothesline! Ambrose goes for Dirty Deads but Barrett leaves the ring and tries to escape with the title but Ambrose stops him by dives through the ropes. Barrett tires to escape again but Ambrose stops him again. Ambrose is unstoppable in his assault on Barrett and the referee disqualifies Ambrose.

After the match, Ambrose hits Dirty Deeds on Barrett and leaves with the Intercontinenal Championship belt  as his music hits.

Hey #BnB, someone's taking your title home with them — DQ or not! #WWEFastLane #ICTitle pic.twitter.com/PJwWMkS8jW

The druids music hits and here they come out! Is it the return of The Undertaker? The gong hits! Taker’s music hits but a casket comes out! Bray Wyatt gets out the casket!

Bray Wyatt talks about how The Undertaker has become just like everyone else.

Wyatt says he knows Undertaker knows he can listen him and says he’s not afraid of him. Wyatt ends by saying “At WrestleMania, I’ll claim the soul of The Undertaker”.

If you're going to call out The Deadman, THAT's the way you do it. With STYLE! #WWEFastLane #BrayWyatt #Undertaker pic.twitter.com/7uyZlTIHiU

Here’s an awesome promo for Bray Wyatt vs. The Undertaker:

We get a promo for Cena vs. Rusev. Out comes the WWE United States Champion, Rusev along with Lana. Out comes John Cena to a surprisingly good reaction from the crowd. Both Rusev & Cena gets booed during the introduction. Rusev takes control of the match early on. Spinning Heel kick from Rusev and Cena is knocked down. Cena goes for his vintage shoulder tackle but Rusev counters and body slams Cena. Rusev is in complete control of the match.

Cena with a suplex on Rusev. Rusev hits DDT on Cena. Cena with his vintage moves and hits the 5 Knuckle Shuffle as he shows his “You Can’t See Me” taunt to Lana. Cena goes for the Attitude Adjustment but Rusev counters and hits a big superkick. Cena with a modified DDT off the second rope and both men are down. Rusev and Cena traded big punches to each other as the crowd booes both of them. Cena counters Rusev’s move and applies a crossface instead of STF. Rusev breaks the hold and hits a big slam on Cena!

Rusev is still undefeated and Rusev and Lana leave the arena with the US Title. After the match, the referees and doctors checks on Cena. Cena refuses any medical help or support and leaves on his own.

It’s time for the main event of the evening. Out comes Roman Reigns to a mixed reaction from the crowd. Out comes Bryan to a good reaction. Bryan and Reigns lock up.

Roman Reigns overpowers Bryan. Reigns with a big slam on Bryan and Bryan rolls out of the ring. Reigns drives Bryan back first on the barricade and then on the ring apron. Bryan comes back and targets Reigns’ knee. Bryan applies a knee lock but Reigns fights back and breaks the lock. Reigns hits the Samoan Drop on Bryan and follows that up with a flying clothesline! Reigns with a huge clothesline and Bryan flips complete 360! Reigns with 3 modified german suplexes and follows that up with the kick on the apron. Reigns signals it’s Superman punch time but Bryan counters with a kick to the gut.

Bryan dives through the ropes and puts down Reigns and does it again. He does it for the third time but Reigns catches him and slams him on the floor. Reigns goes for the spear but misses wildy and hits the steel steps. Bryan goes for the headbutt off the top rope but Reigns connects with the Superman punch out of nowhere!

Bryan counters the spear and goes for a small package but Reigns kicks out and hits the Knee Plus but Reigns kicked out! “This is Awesome” chants from the crowd. Bryan with slaps but Reigns stops him and Bryan puts in an arm bar and converts it into Yes Lock. Reigns looks in trouble. Reigns is a long way from the ropes. Reigns breaks the hold and pummels Bryan and Bryan is out.

Bryan locks in a triangle choke hold but Reigns counters and slams him down and both men are down. What a match! Reigns & Bryan with punches and kicks and Bryan gets the upper hand with kicks and Bryan connects with a big kick. Bryan looking to hit Knee Plus but Spear by Reigns and Reigns gets the pin!

It’s official now, Roman Reigns is going to WrestleMania to face Brock Lesnar for the WWE World Heavyweight Championship. Bryan doesn’t look happy and pushes Reigns and they shake hands. Reigns’ music hits again. Reigns is smiling as he looks at the WrestleMania sign and celebrates!

Cole and JBL discuss if Undertaker will accept Wyatt’s challenge for WrestleMania 31.