WWE Hall Of Famer “Superstar” Billy Graham has been hospitalized, according to a Facebook post from his wife, Valerie.

She revealed that he had to be hospitalized due to a big infection in his toe.

“Asking for prayers for my husband Wayne he’s been admitted to the hospital for a pretty significant infection in his big toe….he’s diabetic and there is some bone involvement. Most of you know that he’s immune suppressed due to his liver transplant and he’s also dealing with congestive heart failure….

Due to Covid restrictions I cannot be at the hospital but will keep you all updated as I get more information.

We believe in the power of prayer! And I can see the hand of the Lord all over this…even Wayne’s doctor agreed…everything happens for a reason. Wayne was having a difficult time breathing today… the edema in his legs was increasing quickly…. I decided to change is TED hose to a new pair for additional support….that’s when I saw the infection…had he not had the swelling I would not have seen his foot a true blessing in disguise….Thank you Lord Jesus” 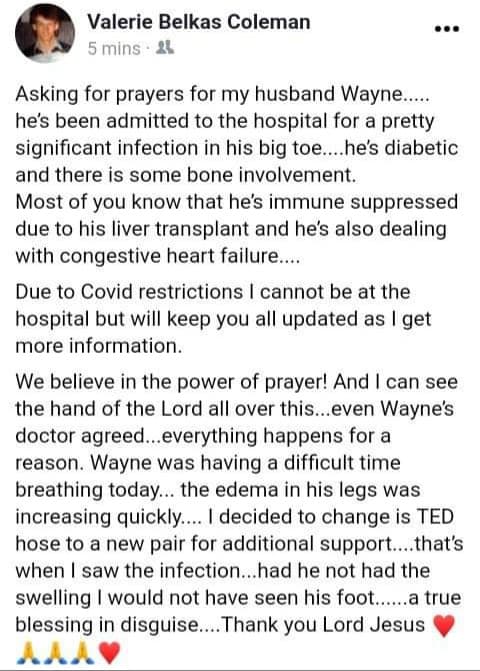