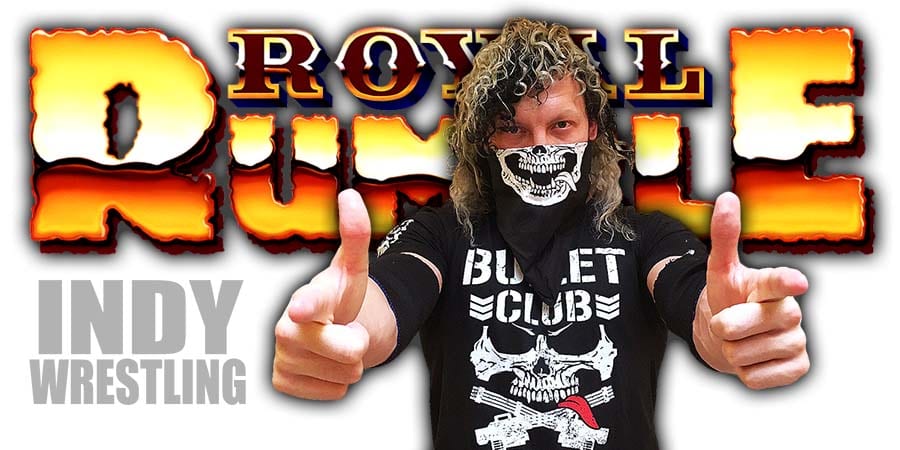 This episode was pre-taped at the Florence Civic Center in Florence, South Carolina and featured matches & storyline segments on the road to the ‘WCW Souled Out 2000’ PPV.

Kenny Omega has been a WWE target for some time now and WWE is fully prepared to break the bank to sign him. If Kenny were to sign with WWE he will want certain terms agreed to before signing anything and that mainly consists of creative control.

Kenny has spent years sculpting his character and the WWE booking is not his style. WWE has become more flexible as of late of letting stars be themselves as AJ Styles has pretty much been able to keep his character.

Our source informed us Vince McMahon “Revised” the WWE offer to a 3-5 year offer with even higher total amount, creative input (which almost no one gets in contract), WWE Championship run, with added bonuses such as E-Sports video game opportunities which include WWE sponsored Video Game YouTube channel and tournaments, plus higher merchandise percentages.

Former Bullet Club leaders AJ Styles & Finn Balor have pitched recruiting calls to Omega and The New Day have also sent out welcoming text/calls to Omega on behalf of WWE.

Will Vince be able to sweet talk him with all these perks and benefits that the other two companies can’t offer? That is to be determined.

Our source also indicates that one of Omega’s top priorities is having huge matches wherever he signs and that he is highly interested in having matches with Finn Balor, AJ Styles and Adam Cole, and WWE has these talents for his dream matches.

He’s already done everything in NJPW and AEW’s roster is still being developed. Many have scoffed at the idea of Omega signing to WWE, but we have been told that “He (Omega) is taking this offer very seriously” and “They (WWE) are a lot closer than people think”.

But a lot depends on what the other companies decide.

Omega dropping the IWGP Heavyweight Title was directly affected by ongoing contract negotiations as NJPW made the call to protect themselves in the event of a standstill in contract talks.

Omega staying in Japan is absolutely dependent on if NJPW/ROH and AEW can strike a deal or even verbally agree.

NJPW has also offered Omega an excellent deal (but not as high as WWE) recently. If Omega were to re-sign with NJPW, they would do an Omega vs. Takahashi IWGP Heavyweight Championship rematch in the main event of G1 Supercard show at MSG on April 6th as the Omega vs. Takahashi feud stands at 1-1 each.

NJPW already has a working cross-brand relationship with ROH, but if NJPW/ROH and AEW can work out a Tri-Promotion deal, Omega would likely stay.

Omega has always proclaimed his aspirations to take NJPW to a higher global level and Japan has become his home along with Canada with many friends in the area.

If all promotions can strike a deal, Omega’s decision would become much, much easier.

All Elite Wrestling is mainly built upon his friends, The Young Bucks and Cody Rhodes, and their pact to “Change The World”.

This decision is highly dependent on if AEW and NJPW/ROH can work out a deal. If not then this decision becomes much harder to make.

Omega’s concern is having enough talent to perform with and have great matches.

A TV deal for AEW is still being discussed and not many talents have been signed other than Bucks, Cody, Hangman, Brandi and Britt Baker.

A hybrid of NJPW/AEW/ROH would definitely make this his ideal landing spot, but that is something up to these other companies which Omega has no control over.

Chris Jericho, a close friend and mentor to Omega, who is also speculated to be involved with AEW has been offering guidance to Omega to help navigate through this decision.

Ring Of Honor has concerns with working with AEW because both companies will be recruiting and bidding for the same wrestlers in the industry. Cody and The Bucks leaving has resulted in a significant blow to ROH’s drawing power and essentially ROH and AEW have become competition.

Ring Of Honor’s willingness to do business with AEW is a MAJOR wildcard in this Kenny Omega situation.

NJPW, AEW and ROH will be meeting over the next few weeks to discuss possible solutions on how to all work together.

We believe Kenny Omega will wait to make his final decision until this gets sorted.

The Omega Contract Situation Has Become A Complicated Topic As This Will Not Solely Rely On One Persons Decision But Also The Ones Made By Others. Read Below As We Breakdown How WWE/NJPW/AEW/ROH All Play Different Parts In Omega's Wrestling Future Path pic.twitter.com/ad7eZcj2xZ