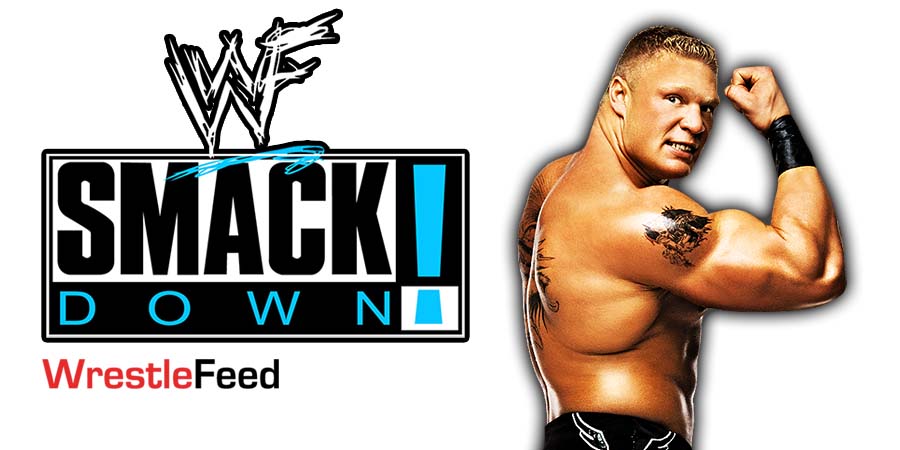 Below are the complete results from tonight’s WWE SmackDown, which was the go-home episode for tomorrow night’s SummerSlam 2022 premium live event:

– Drew McIntyre def. Sheamus in a Donnybrook Match to earn an Undisputed WWE Universal Championship match at Clash At The Castle

Theory attacked McIntyre with his Money In The Bank briefcase after the match.

– Happy Corbin bought a ticket to sit behind Pat McAfee and had a ‘Loser’ sign with Pat’s old mugshot on it.

Corbin went on to throw popcorn at McAfee and kicked him in the balls.

– Ronda Rousey took out Shotzi. Ronda called out Liv Morgan. Ronda told a fan that their mom failed them after they told her to shut up.

– Undisputed WWE Tag Team Champions The Usos & Street Profits came face to face before SummerSlam. A brawl broke out between both teams and Special Guest Referee Jeff Jarrett got taken out with a Superkick from Jey Uso.

With the approval of #SummerSlam Special Guest Referee @RealJeffJarrett, The @WWEUsos and The #StreetProfits BRAWLED on #SmackDown and 'Double J' got stuck in the middle of it! pic.twitter.com/ZkRVGsqhZH

After the match, Erik & Ivar wrapped a Steel Chair around Xavier Woods’ ankle and hit the Chair with their Shields.

– Paul Heyman came out and assured the fans that Roman Reigns is going to smash Brock Lesnar tomorrow night at SummerSlam, be the Last Man Standing and continue to reign as the Champion for 700 days.

Brock Lesnar then came out and Theory attacked him from behind with his MITB briefcase. However, Lesnar fired back with a series of German Suplexes.

Theory then managed to escape and got hit with a Claymore Kick from Drew McIntyre outside the ring.

Lesnar & McIntyre had a stare down to end the show, as this could be the main event of Clash At The Castle if Lesnar beats Reigns for the Undisputed Title tomorrow night.

Also Read: Backstage News On What Vince McMahon Said To Brock Lesnar To Bring Him Back To SmackDown Last Week

The Powers of Pain vs. John Weiss & Gary Wolfe