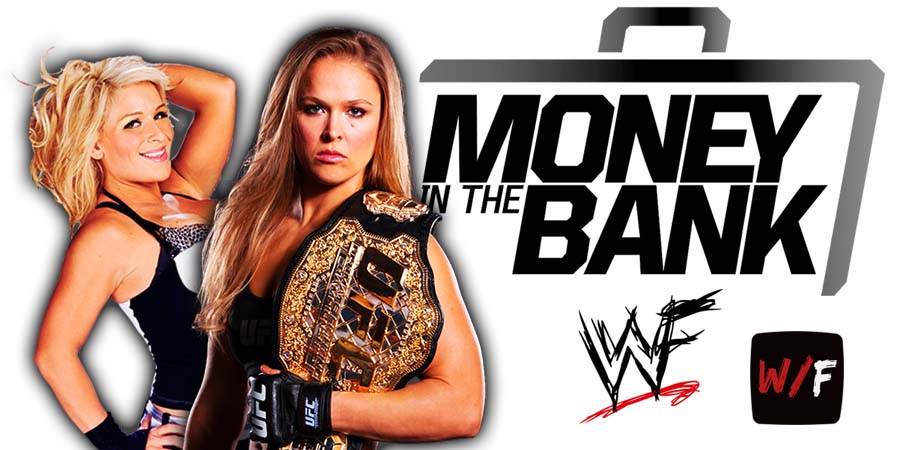 – Drew McIntyre kicked off tonight’s SmackDown by saying that he plans to win the Money In The Bank contract and then cash-in on Roman Reigns or Brock Lesnar to win the Undisputed WWE Universal Championship.

The Brawling Brutes interrupted. Sheamus said Drew is in the Money In The Bank Ladder Match because Adam Pearce felt sorry for him.

Paul Heyman interrupted. Heyman said Pearce has a big announcement and it’s that Drew & Sheamus are no longer in the Men’s Money In The Bank Ladder Match.

They will face off against The Usos tonight and they will be put back in the match if they manage to defeat the Undisputed WWE Tag Team Champions.

– Sami Zayn def. Shinsuke Nakamura to qualify for the Men’s Money In The Bank Ladder Match

Sonya, Shayna Baszler & Xia Li attacked Raquel & Lacey after the match, but they fought them off.

– Natalya came out dressed as Ronda Rousey with a stroller. She said that she’s the saddest woman on the planet and has no chance against Natalya at Money In The Bank.

The real Ronda Rousey came out and said she couldn’t recognize Natalya without her rack out and that the closest Natalya will ever come to being a main attraction in this company is dressing up like her.

Natalya threw the baby stroller at Ronda and escaped.

"The closest you'll ever get to being a main attraction in this company is dressing up like me." 😮#SmackDown #MITB @RondaRousey @NatbyNature pic.twitter.com/l5r1C6U3Fo

– Shotzi vs. Aliyah got canceled due to Aliyah suffering an injury. She got replaced by Tamina.

– Shotzi def. Tamina to qualify for the Women’s Money In The Bank Ladder Match

– Max Dupri said he can’t present his Model due to Adam Pearce not having the dressing room exactly at 68.3 degrees, but will give him another week to get it right.

– Pat McAfee challenged Happy Corbin to a match at SummerSlam 2022.

This episode was pre-taped at the Civic Center in Wheeling, WV and featured matches & storyline segments on the road to the ‘WWF King of the Ring 1995’ PPV.

Shawn Michaels vs. The Brooklyn Brawler

Men on a Mission vs. Jerry Flynn & Mike McReynold

The Undertaker vs. Barry Horowitz