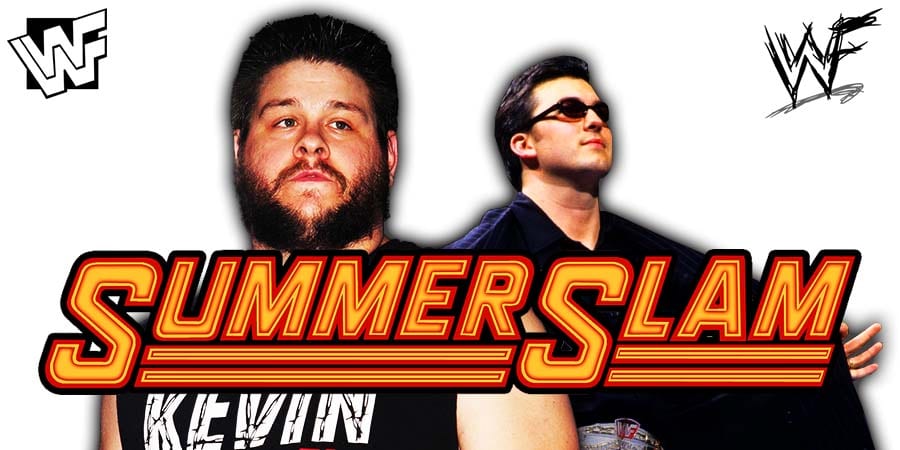 The match begins and Ricochet begins impressing the crowd with his moves. Ricochet’s leg got hurt and Styles is working on that now.

After back & forth action and interference by Gallows & Anderson, Styles hits a sick Styles Clash to pin Ricochet!

A thing of beauty. #SummerSlam pic.twitter.com/sN9ESsl1xu

Next match is for the SmackDown Women’s Championship. Ember Moon makes her way out first, followed by Bayley.

Bayley hits her finisher from the top rope and pins Ember.

Up next is Shane McMahon vs. Kevin Owens. Owens’ WWE career is on the line during this match.

Shane O’Mac brings out Elias as the special guest enforcer for this match and he’s interfering from the outside.

Shane tries to lock in the Sharpshooter on Owens and gets booed big time. Owens counters and goes on to hit a Pop-Up Powerbomb, but Elias interrupts and prevents the referee from doing the pin count.

Owens has a chair in his hand and Shane slaps him. Owens is really angry, but knows that he can’t hit Shane with the chair or he’ll get disqualified.

Owens hits two Frog Splashes on Shane and goes for the cover, but Elias pulls out the referee.

Owens lays out Elias and the referee with a Cannon Ball on the outside.

Owens low-blows Shane while the referee isn’t looking and hits the Stunner for the pinfall!

With this win, Owens has saved his WWE career.