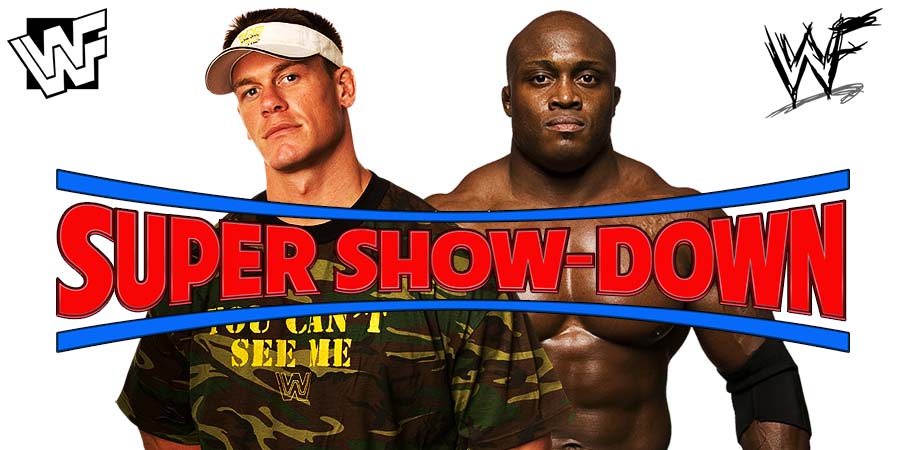 This is part 3 of our WWE Super Show-Down Live Coverage (part 2 is here).

Up next is a tag team match between the teams of Elias/Kevin Owens and John Cena/Bobby Lashley.

This is Cena’s first match since the Greatest Royal Rumble event (where he defeated Triple H).

Elias & Owens are giving Lashley a hard time as Cena hasn’t been able to tag himself into the match.

Owens hits a Frog Splash on Lashley and goes for the cover, but Lashley kicks out.

Owens now applies the Front Face Lock on Lashley, but Lashley fights out of it and nails a Spinebuster!

Lashley tags in Cena to a HUGE pop and Owens tags in Elias. Cena goes vintage and does his shoulder tackles and the 5 Knuckle Shuffle sequence!

Cena nails an Attitude Adjustment on Elias and then hits his new finishing move – The Lightning Fist (6th Move Of Doom) on Elias to pick up the win for his team!

Cena cut a promo after the match and said he doesn’t know what the future holds for him and then thanked the fans before leaving.

"@WWE has always been my home and will always BE my home. I know my life is changing, but I never, EVER forget where I came from." – @JohnCena #WWESSD pic.twitter.com/zk7Aq4i5J4