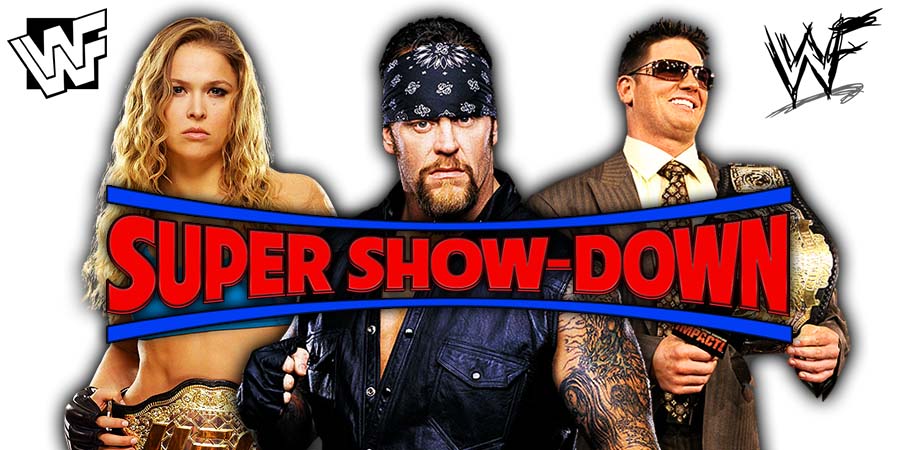 After the Demolition gimmick, Darsow became known as Repo Man in 1991, a character he portrayed till he left the WWF in march 1993.

WWE Super Show-Down turned out to be the best WWE PPV of 2018, mainly because of the lively crowd throughout the show and the ‘Last Time Ever’ match between The Undertaker & Triple H.

Triple H defeated The Undertaker after multiple interferences by WWE Hall of Famer Shawn Michaels. This was made possible because the match was turned into a No DQ match.

After the match, all four men (Taker, HHH, Kane, HBK) showed respect to each other and we got a moment that we’ll never forget. However, immediately after that moment was over, The Undertaker laid out both Triple H & Shawn Michaels.

The Deadman clearly didn’t forget what HHH & HBK pulled during the match and made them pay for it.

1. The longest match of the night was The Undertaker vs. Triple H. It lasted 27 minutes and 35 seconds.

2. Triple H defeated The Undertaker in the main event. This was HHH’s first win over Taker in a singles match in 16 years.

3. Cedric Alexander lost the WWE Cruiserweight Championship to Buddy Murphy. This was Cedric’s first singles loss in a year.

4. Triple H’s win over The Undertaker was his first singles win in over two years.

5. Buddy Murphy winning the WWE Cruiserweight Championship in Melbourne, Australia was the third ever Title change in Australia in company’s history.

7. The Shield defeated The Dogs Of War (Braun Strowman, Drew McIntyre & Dolph Ziggler). The Shield have been undefeated in 3 on 3 matches since 2015.

8. Asuka has lost only two tag team matches in her WWE career. Both of these losses were to The IIconics.

9. Daniel Bryan defeated The Miz in a 2 minute match. Bryan’s record against The Miz now is 4-2-1 in singles matches.

10. After his match at WWE Super Show-Down, Triple H now shares the #2 spot with Kane on the list of the most PPV matches in WWF/E history. Triple H & Kane both have 167 PPV matches now. The Undertaker is on the #1 spot with 169 PPV matches.