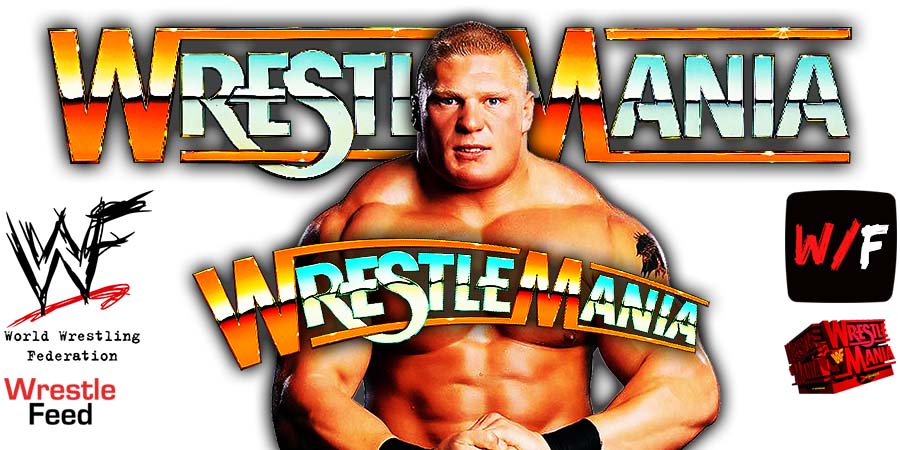 • 1st Main Event Of WrestleMania 38 To Be Revealed Tonight

One of the main events for WrestleMania 38 will be revealed tonight, as Men’s Royal Rumble 2022 winner Brock Lesnar will appear on tonight’s RAW to reveal which champion he’ll face at WrestleMania 38.

Bobby Lashley is the WWE Champion and Roman Reigns is the Universal Champion, and Lesnar is feuding with both of them right now.

“Brock Lesnar had a rollercoaster of a Royal Rumble, losing his WWE Championship to Bobby Lashley in controversial fashion following an attack by Roman Reigns and a seeming betrayal from his advocate Paul Heyman before entering the Royal Rumble Match at No. 30 and running roughshod over the remaining Superstars to earn a World Championship opportunity at WrestleMania 38.

After a wild turn of events, The Beast now has a decision to make on who he will challenge on The Grandest Stage of Them All. Will it be The All Mighty or The Head of the Table? The Superstar who took his WWE Title, or the man who handed it to him on a silver platter?

Tune in to Monday Night Raw at 8/7 C on USA to hear who Lesnar calls out!”

Below are the two main events of last year’s WrestleMania:

On this day in 1999, we lost Old School Wrestling Legend Giant Baba (Real name: Shohei Baba) at the age of 61 due to cancer.

Most will also remember Giant Baba as the promoter of All Japan Pro Wrestling (AJPW), as well as a close personal friend of fellow Pro Wrestling Legend André The Giant.