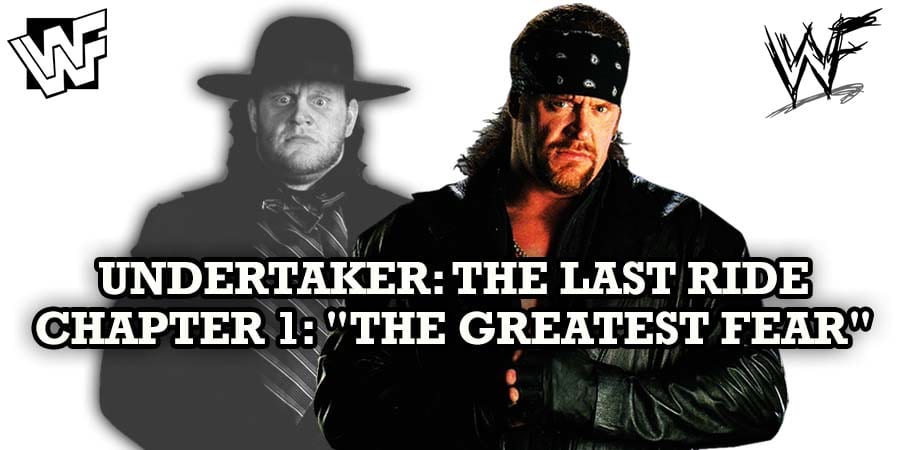 “Chapter 1: The Greatest Fear” of Undertaker: The Last Ride docuseries is now live on the WWE Network.

– Undertaker talked about how “The Streak” made it okay for him to wrestle once a year, because he had to defend it at WrestleMania.

– There was a 5 year stretch where his schedule would be: prepare for WrestleMania, have the Mania match, then have a surgery for whatever was bothering him going into that match, then go straight into rehab and right into training to be ready to go to Mania again.

– Triple H said the hardest thing a wrestler can do is wrestle once or twice a year.

– In the two matches Taker had with Shawn Michaels at WrestleMania, he was “excessively sore” in both of them.

– The WrestleMania 27 match with Triple H (where Taker got carted away after the match) was brutal and he spent two days at the hotel after it.

– After WrestleMania 27, Taker got his hip repaired and then the next two WrestleManias (28 & 29) were good for him.

– After that, the match with Brock Lesnar happened at WrestleMania 30 and he doesn’t remember that match because of the concussion he suffered. Taker doesn’t know how he got through that match.

– After the WrestleMania 30 match, Vince McMahon called for help backstage as Taker was found sitting in the walk way outside of the Gorilla position and he had the “happy days” look on his face that he had no idea where he was. Taker then smiled and said “Hey!!” to WWE’s athletic trainer Larry Heck and Larry knew something went wrong in that match. Taker was then taken to a hospital.