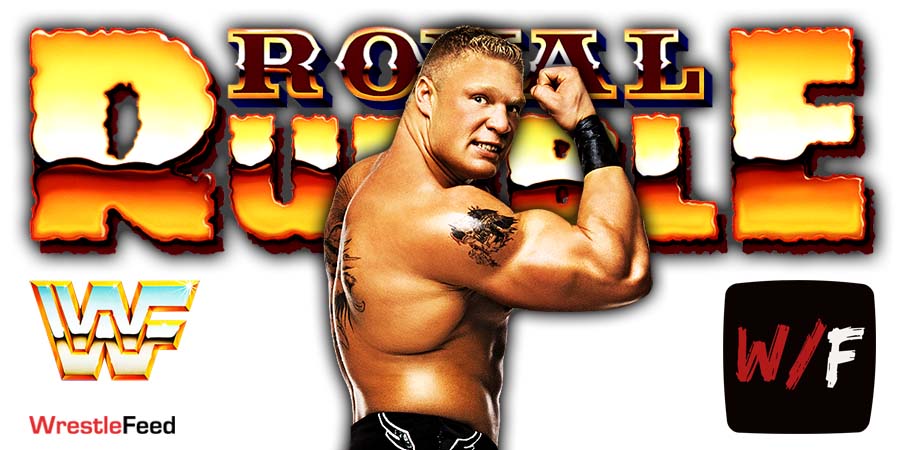 According to the Wrestling Observer, Brock Lesnar and Ronda Rousey aren’t scheduled for this Sunday’s WWE Royal Rumble 2021 pay-per-view.

Lesnar isn’t under a WWE contract right now and Rousey is under contract till April 10th (which is the first night of WrestleMania 37).

John Cena isn’t scheduled for the PPV either. He’s currently in Vancouver, Canada to film the Peacemaker spin-off series.

Speaking of the Royal Rumble, the following 3 names could very well be surprise entrants in the Men’s & Women’s Royal Rumble 2021 matches:

Rollins has been on a hiatus for a couple of months now. He recently became a father and is at home to help Becky Lynch with their new born child. He was last seen on WWE programming at Survivor Series 2020. WWE On FOX accidentally advertised him for the January 1st episode of SmackDown, but later deleted their tweet.

On the other hand, Priest & Ripley have been rumored to debut on the WWE main roster for a while now.

Original plan was for Priest to debut on SmackDown a few weeks back and get involved in the Roman Reigns – Kevin Owens storyline, but that plan got scrapped and word going on now is that Priest will join the RAW brand.

On this day in Pro Wrestling history on January 29, 2006, World Wrestling Entertainment aired their annual ‘Royal Rumble’ event LIVE on PPV from the American Airlines Arena in Miami, Florida.

The winner of the Royal Rumble match earned the right to challenge either the WWE Champion (RAW) or the World Heavyweight Champion (SmackDown!) for the title in one of the main events of WrestleMania 22.