After defeating Natalya in her hometown of Toronto, Ontario, RAW Women’s Champion Becky Lynch is looking forward to bigger things.

Last week on RAW, she delivered a promo in which she said that she would be going after all the women on the roster. She gave them a clear message to get her before she gets them.

Later that night, an injured Natalya came out to remember her father, Jim Neidhart, who passed away an year ago, in an emotional moment. However, it was rudely interrupted by the returning Sasha Banks, who first pretended to be a friend of Natalya, but eventually, showed her true colours and attacked The Queen Of Harts.

Before The Boss could do any severe damage, Becky Lynch rushed to the ring to save Nattie, but she failed to do so, as The Boss had other things in mind. Banks brutalized the RAW Women’s Champion with several chair shots, and even hit it one time on her head.

This week on RAW, The Man sent out a strong message to Banks, and made it clear that she was coming after her. Banks also did not stay behind, and brutalized Nattie once again to send a message to the champ. This feud is probably leading to a RAW Women’s Title match between the two women at WWE Clash Of Champions.

In this article, let’s take a look at 4 reasons why Sasha Banks should defeat Becky Lynch at Clash Of Champions.

4. Only Active Wrestler On The RAW Roster Who Is A Threat To Becky Lynch 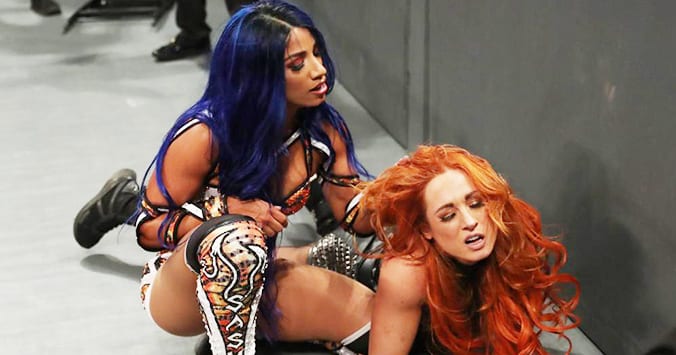 There’s no doubt that the RAW women’s roster is filled with some extremely talented wrestlers who have put in a lot of hard work to reach the position they are on at the moment.

But unfortunately, WWE hasn’t built up any of them as superstars who could headline an event. For almost a year, RAW was about Ronda Rousey, which is another reason no other woman got the spotlight.

Ronda Rousey is currently on a hiatus from WWE. Alexa Bliss is working with Nikki Cross in the Women’s Tag Team division. Besides them, none of the other wrestlers on RAW are worthy of defeating Becky Lynch.

Sasha Banks’ return has opened the door for WWE to build up a feud for Becky Lynch where she faces an opponent who seems like a legit threat. Moreover, Banks has achieved a lot in the past, so it will be a clash of the two most decorated women in the current era of WWE.

The new heel persona of The Boss just makes her look even more dangerous. Banks defeating The Man won’t hurt the RAW Women’s Champion’s credibility, although it may help WWE to further proceed the rivalry, thus making it one of the most memorable rivalries in recent memory.