The Undertaker returned to WWE to face Goldberg this past June at WWE Super ShowDown in Saudi Arabia. However, the match did not live up to the hype and left the WWE Universe disappointed.

After the match, fans thought that they wouldn’t get to see The Deadman for a long time, but surprisingly, he returned before the Extreme Rules pay-per-view to form an alliance with Roman Reigns. The two went on to face Shane McMahon and Drew McIntyre in a No Holds Barred match at Extreme Rules, where they came out as the winners.

Since then, The Deadman has been off WWE programming. WWE has announced that The Undertaker will be making his return to WWE programming on SmackDown Live next week at Madison Square Garden in New York City.

Next week, The #Deadman returns to #SDLive… #Undertaker pic.twitter.com/FjHE9dpa1j

In this article, let’s take a look at 5 things The Undertaker could do on SmackDown next week. 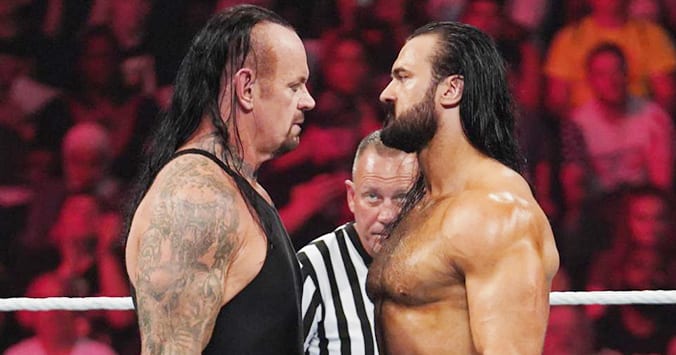 The seeds for a potential Undertaker vs. Drew McIntyre feud were planted back in June when The Deadman saved Roman Reigns against Shane McMahon and Drew McIntyre. WWE also teased a feud between them by giving them a face-off moment during the No Holds Barred match at Extreme Rules.

According to The Dirty Sheets, McIntyre is one of the wrestlers Taker wants to face before retiring. He reportedly hugged McIntyre backstage after their match at Extreme Rules.

The timing to start the feud looks perfect. The Scottish Psychopath has nothing to do currently as he’s out of the King Of The Ring Tournament, while Taker might be looking for his next opponent at WWE Crown Jewel 2 this October.

Fans would love to see the two face off in the ring. Taker and McIntyre last faced each other on an episode of SmackDown in 2010 in which Taker came out as the winner.