Tag Team wrestling is a fundamental of the pro wrestling business. Without it, every wrestling event is incomplete.

Not only do the competitors inside the ring need to have chemistry with who they’re facing, but they also need to have even more of it with the man or woman that’s in their corner. The trick of getting that balance just right is likely why the success and popularity of tag team wrestling is never a constant in WWE.

A lot of the time creating that perfect team isn’t as simple as putting together two Superstars that seem like a good fit for one another.

However, some tag teams were the coming together of the north and south – as the paired WWE stars were polar opposites of each other. These combinations were indeed insane and despite the lack of co-ordination, these tag teams ended up entertaining the WWE Universe.

2019 has been an year where we’ve seen many unlikely alliances inside the squared circle. In this article, let’s take a look at 7 tag teams we never expected to see in WWE. 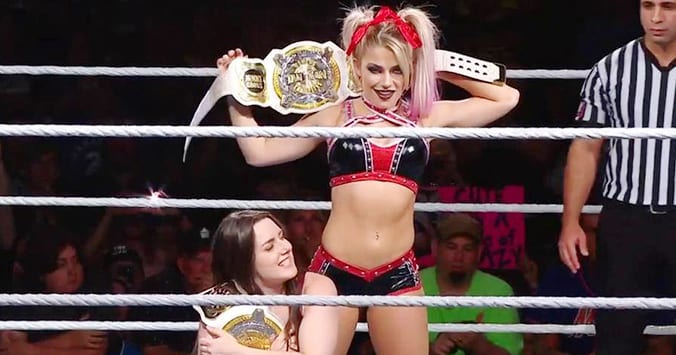 Current WWE Women’s Tag Team Champions, Alexa Bliss and Nikki Cross, is a team nobody ever expected to see in WWE.

Alexa Bliss is one of the most popular female wrestlers in WWE. But unfortunately, she suffered a concussion last summer and was seen less often in the ring. WWE did not completely take her off TV while she was healing up, instead they gave her a non-wrestling role for several months.

Bliss was ready to step in the squared circle by WrestleMania 35, but WWE did not let her wrestle and made her the host of the ‘Grandest Stage of Them All’ earlier this year. Bliss, who was once a main event star, did not do much after healing up until she crossed paths with Nikki Cross.

Nikki Cross made her debut on SmackDown last year against Becky Lynch, and impressed everyone in her first ever match on the WWE main roster. Cross did not do much on the blue brand and moved to RAW during the Superstar Shakeup several months ago.

Finally, Bliss and Cross met on the red brand and gradually formed an unlikely alliance. Despite The Goddess’ mean character, she fit in very well with the bizzare Nikki Cross.

They went on to face Bayley for the SmackDown Women’s Title at the Extreme Rules PPV back in July, but failed to capture the title. However, they are now on top of the Women’s Tag Team division in WWE after dethroning The IIconics as Champions.