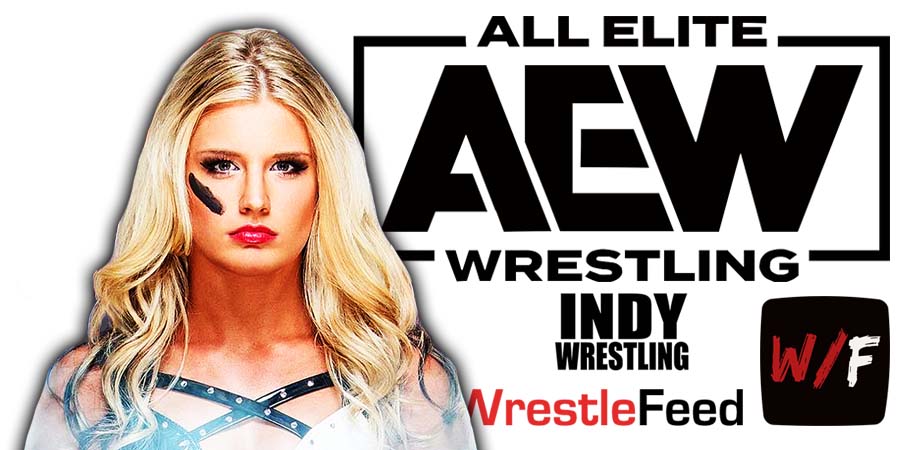 During an appearance on Renee Young’s podcast, current AEW wrestler Toni Storm talked about leaving WWE last year and the reason behind it.

“Let’s just face it, they fire people left, right, and center out of the blue, and I could be fired next week, and then what’s the point?

It just felt very pointless in the end, to be honest, and it’s been hard to convey that. Especially to the fans, especially to people who just aren’t in this business and they’ll never understand.

I must sound ridiculous to those people but the reality of what it’s actually like [in WWE] is something else.

I didn’t feel that appreciated, you know what I mean? And I just felt like they didn’t, at times, have very much respect for me and it just was — it totally — I feel like over time, they kind of just crushed my love for wrestling.

It just wasn’t even wrestling anymore. You’re not even allowed to say ‘wrestling’. You get put in a group text like, ‘Don’t say professional wrestling in promos’ and this and the other and I’m like, oh yeah, I understand but like whatever, but this — I don’t know.

Over time, it just kind of — there’s so much f**kery, you know? So much bullsh*t, each to their own. Some people don’t get that and some people do and I was just sick of it, I was just tired of — what am I doing this for? What am I trying to prove to anyone? Will anyone think any differently of me really?

Will people really care where I go and do fake wrestling moves? Do people really care that bad that I’ve gotta be miserable day in, day out? Just because people will go, ‘Oh, that was ungrateful and she shouldn’t have done that,’ blah, blah. Well I was unhappy and why should I be unhappy? So that I can do WrestleMania?

Okay. That’s nice and everything but I’m still gonna be miserable the next day, and I thought my whole purpose in life was to go to WWE but then over time, I realized, it’s just pro wrestling that I love. It’s not a company that I love. I just love pro wrestling.”

Below are Toni’s accomplishments in WWE:

She recently competed in the inaugural Owen Hart Foundation Women’s Tournament in AEW, where she lost to Dr. Britt Baker, D.M.D. in the Semi-Final.

It was broadcasted from the Fleet Center in Boston, Massachusetts and featured matches, interviews & storyline segments on the road to the ‘WWF King of the Ring 1999’ PPV.

1. WWF World Tag Titles: The Acolytes vs. The Brood

4. The Godfather vs. Billy Gunn

7. WWF World Heavyweight Title: The Undertaker vs. The Big Show