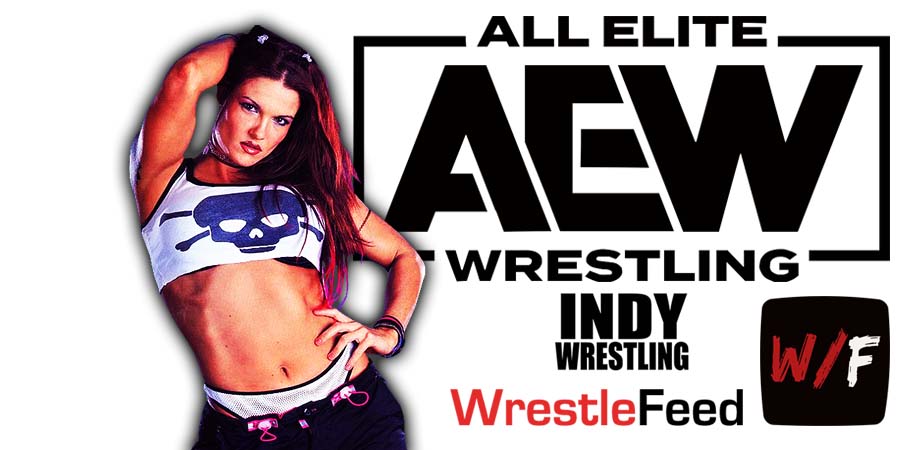 WWE Hall Of Famer Lita is back on WWE programming and will compete in the 2022 Women’s Royal Rumble match.

Lita appeared on last week’s SmackDown and revealed that she plans on winning the Royal Rumble and wants to win the Women’s Title one more time at WrestleMania 38.

SmackDown Women’s Champion Charlotte Flair then confronted her and Lita laid her out with a Twist of Fate.

However, all of this probably wouldn’t be happening if Lita appeared in All Elite Wrestling last year.

According to Fightful Select, AEW Officials reached out to Lita for a Women’s Title match against Dr. Britt Baker, D.M.D. at the All Out 2021 pay-per-view, but they couldn’t reach a deal:

“AEW had reached out to the WWE Hall of Famer back in 2021 to appear on a show, but the two sides were unable to come to terms.

Specifically, we learned that a pitch was made to Lita to appear in a top program with AEW Women’s World Champion Britt Baker.

There were talks between the two sides and a creative plan laid out to possibly happen around AEW All Out 2021, but it didn’t end up happening.”

• Old School Wrestling Celebrity Would Have Celebrated His Birthday

Famous actor & entertainer Andy Kaufman started to wrestle women, who’d win a $1,000 prize if they could defeat him, and offered World Wrestling Federation promoter Vince McMahon Sr. to bring that act to WWF TV, but Vince Sr. dismissed the idea, so Kaufman had Bill Apter introduce him to Jerry “The King” Lawler, who ended up bringing him to the Memphis territory and working a program together.