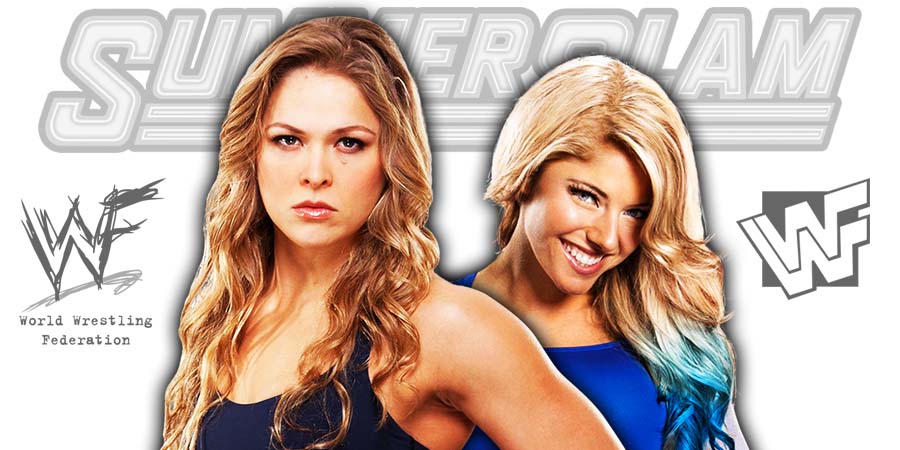 In 2018, Ronda Rousey feuded with Alexa Bliss and defeated her to win the RAW Women’s Championship.

On WWE’s 365 a few years ago, Alexa revealed that she suffered two concussions while working with the former UFC Champion.

“Hell In A Cell happened and I took a headlock takeover and when I did, my head went straight into the mat. This stuff happens and it’s no one’s fault. I had a really bad headache, I told my doctors, I said, ‘Hey, something’s not right, my head just doesn’t feel right.’

I landed in Orlando and I took the impact test and I failed it pretty good, and that’s when they diagnosed the concussion.

I got called into Vince [McMahon’s] office and he said, ‘We’re going to give you time off. We’re going to send you to the best doctors and we’re going to figure out what’s going on. I want you to rest and recover because we need you to be one hundred percent.’

The weekend before Evolution, they wanted me to have a weekend of live events before Evolution. [Ronda Rousey and I] slipped, crashed, and burned. I was in the training room, my nose was bleeding, I was crying. The doctor said, ‘I think you’re concussed.’ It’s like the process starts all over again.

The day before Evolution, I was not cleared to be in the match. This is probably the match I was looking forward to the most, from the day I started in WWE, I said, ‘I wanted a match with Trish Stratus.’

It’s very heartbreaking when it’s out of your control.”

“Bliss reportedly disliked Ronda due to her reckless in-ring style causing injuries. The shade thrown at Ronda from Alexa in a group chat with other WWE women confirmed the heat and the timing did see Bliss miss out on many months of action after getting banged up.”

“This is quite comical & not true. I’m only in one group chat & it’s with my bridal party 😂 … #KeepTryingTrolls”