Former WWE Diva Ashley Massaro was trolled big time on twitter yesterday, when someone with a fake account of Stephanie McMahon wrote a tweet to her which read that WWE is inviting Ashley to next week’s Monday Night Raw.

Ashely didn’t pay much attention to the fake account’s username and fell for the prank. She happily agreed to make an appearance on Raw and thanked Stephanie McMahon & the WWE Universe.

Once she realized that this was a prank, she deleted the tweets. But here’s a pic of the conversation between her and the fake account: 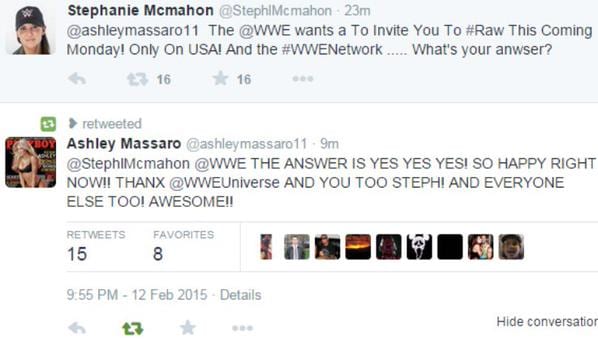 She tweeted the following after this :

Well if thats how u guys feel then let Steph know-the real 1-@StephMcMahon ! I hope u n the fam r doing amazing Steph! Miss u n every1 @ WWE