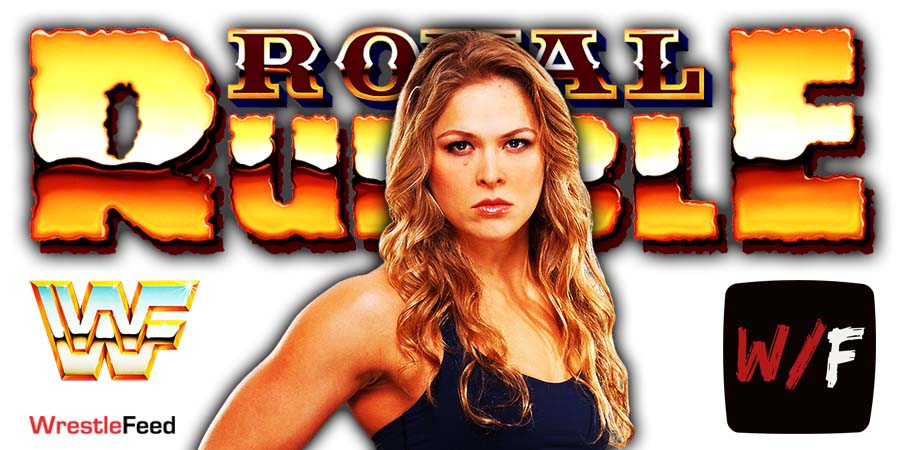 As we have noted before, multiple sources have reported that Ronda Rousey could be on her way back to WWE this Saturday night at the Royal Rumble 2022 premiere live event.

Some reports also state that she could win the Women’s Royal Rumble match and then main event one of the nights of WrestleMania 38.

PWInsider has provided the following updates regarding this situation:

– A WWE Official went to California last week to meet with Rousey.

– Abraham Esparza, Rousey’s personal makeup artist and stylist during her last WWE run, is slated to be at the Royal Rumble and Monday’s RAW.

– Rousey’s return isn’t fully confirmed at this point. It’s still up to her to pull the trigger on her long awaited return. WWE Officials are ready for it and want to book Ronda Rousey vs. Becky Lynch for WrestleMania 38.

“Was wondering if you’d show up again. I’ve still got [the RAW Women’s Championship] and she’s doing great 😘 “

Was wondering if you’d show up again. I’ve still got her and she’s doing great😘 https://t.co/71meimu8Ns pic.twitter.com/Xy0IMfGUoY

During the 50s, 60s & 70s Bastien wrestled for various territories, such as the American Wrestling Association, the World Wide Wrestling Federation, Pacific Northwest Wrestling, NWA Big Time Wrestling, … among many others.