During a recent edition of “What A Rush” podcast, WWE Hall of Famer Road Warrior Animal talked about Becky Lynch’s “The Man” gimmick, women main eventing in WWE & more.

On giving the fans what they want:

“If the McMahons are really listening to the fans and they want to do what they have to do to make the fans happy, you have got to have a line drawn in the sand on who the bad guy is and who the good guy is. That’s what the fans want. They want someone to believe in.

Come on, they want to have a line drawn in the sand because when you make it too confusing for them they can’t cheer for Asuka in the same way and all of a sudden cheer for Becky Lynch in the same match. You just can’t do it and it ends up making the match horrible.”

On Women main eventing in WWE:

“There is a problem in the wrestling business. Yes, the women’s movement is growing, but when the women are the main event and they have the best matches on your card, there’s an issue.”

On Becky Lynch’s “The Man” gimmick:

“I would let her back off of ‘The Man’ thing and let her just be a pure white meat babyface that doesn’t quit. Those are the kind of babyfaces that work. When you come out there with the attitude and strutting your stuff like she’s some kind of tough guy, come on!

Jesus, Lord, anybody that’s ever been in a fight can see right through it and I’m just being realistic because that’s what works in this business. You’ve got to think shoot and work the shoot and right now they’re not taking advantage of their stars who are stars.”

After reading this, below is what former SmackDown Women’s Champion Becky Lynch tweeted about this: 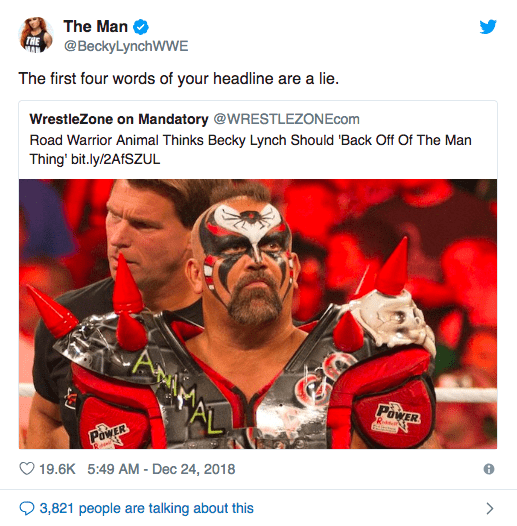