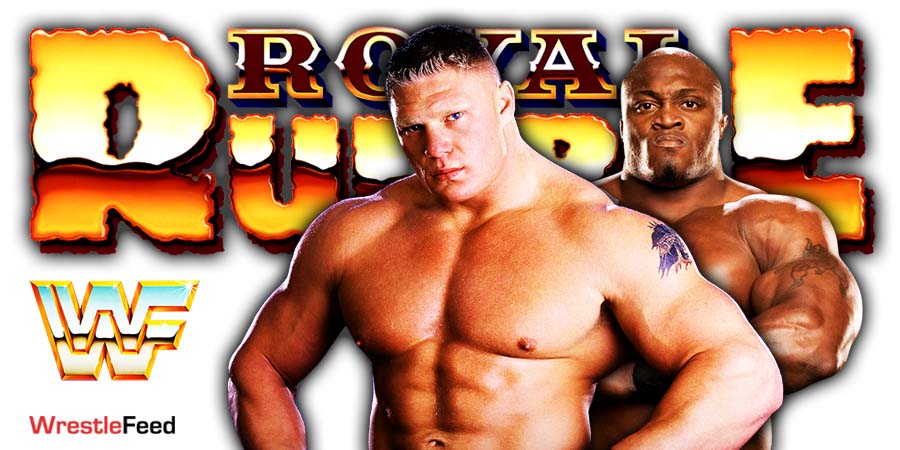 At Royal Rumble 2022, Brock Lesnar will defend the WWE Championship against Bobby Lashley.

During a recent appearance on WWE’s After The Bell podcast, Lashley took a shot at Lesnar and said the following:

“I’ve been having to prove myself forever. Let me make this personal.

When Brock went into the UFC, Brock had a gym built outside his house. They sent training partners to Brock. They gave Brock a boatload of money. It’s easy to train when all you have to do is wake up, stretch, walk outside your house, go work out with your partners and walk back in. It’s simple to do that.

When I started fighting, I was flying down to Florida doing training camp for a week. I was flying to California training with Josh Barnett, training with Daniel Cormier, and all these different guys hopping around and raising three kids on my own.

I was juggling a schedule and it was just me. It was difficult. It wasn’t just that I could roll outside my house and have everything handed to me. This is just another one of those cases where I expect to have to prove myself, and I can prove myself to anyone.

Over the next few weeks, I’m going to show some of my training videos so people can see what I do. I kind of shut that down a little bit over the last few months, but I’m going to start showing them the kind of training I go through to get prepared for a fight like this so people will not just think, ‘Ok, is Bobby at Brock’s level?’ Bobby was at Brock’s level a long time ago. I’m at a whole different level right now and I think Brock knows that.

The same way that I said I looked at Brock’s eyes and I saw that Brock doesn’t have a soul, Brock was looking in my eyes and he saw that I enjoyed that, and I think that scared him a little bit.

I think right now we are respecting each other, but there’s going to be a time when there is going to be some disrespect and we’re going to have to both prove ourselves. So when he says, ‘Bobby who?’, I’m going to say, ‘Brock who?’ because that’s what I want to find out.”

This episode took place at the TNA Impact Zone in Orlando, Florida and featured matches, interviews & storyline segments on the road to the ‘TNA Against All Odds 2007’ PPV.