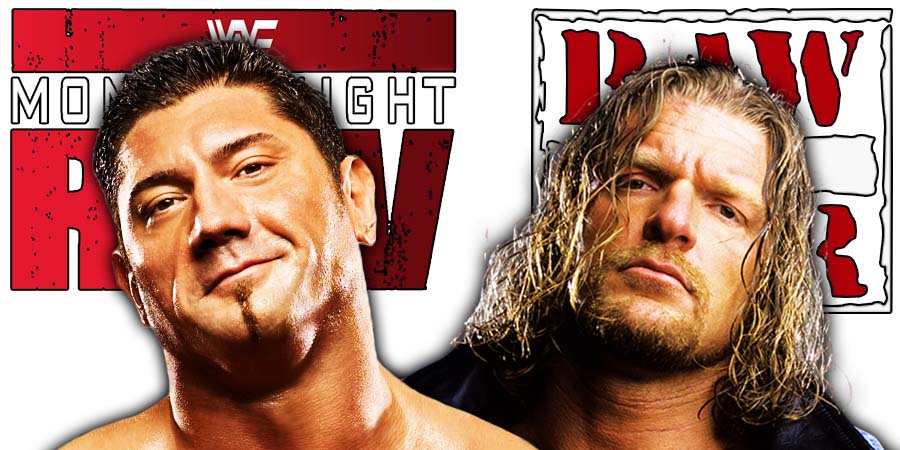 On tonight’s post-FastLane 2019 episode of RAW, “The Game” Triple H came out for his segment with “The Animal” Batista and HHH isn’t wearing a suit and his fists are taped – which means he’s ready for a fight!

Batista then came out dressed like he’s going to a party. Batista’s personal security team also came out after this.

Batista doesn’t say anything and HHH tells him to say something rather than just standing on the stage like a nose-ring model.

Batista asks HHH where his Sledgehammer is. Batista asks HHH to give him what he wants. Triple H refuses and asks how many times Batista has quit WWE. HHH then threatens to beat him up after beating up his security (who HHH called “Guardians Of The Indy Scene”).

Batista said he quit WWE to go away from him because Triple H always held him down. Batista says HHH is going to give him what he wants or he’ll continue to hurt the people HHH loves.

Batista says he wants Triple H at WrestleMania 35! Triple H says he’s on and we have a WrestleMania 21 rematch set, ladies & gentlemen!

What does @DaveBautista want?? He wants @TripleH at #WrestleMania! And he's GOT IT! #Raw pic.twitter.com/w8tl2EcxXC

Batista says WrestleMania 35 is going to be his final match and he’s going to end Triple H’s career as well.

Triple H says the match will be No Holds Barred!

Below is the updated match-card for WrestleMania 35: