On this day in 2010, World Wrestling Entertainment aired another episode of their weekly TV show ‘WWE Superstars’.

You can now watch the entire episode in 720p HD quality:

We just received word that Old School WCW Veteran Frank Andersson passed away earlier today at the age of 62 due to complications from heart surgery.

How many Pro-Wrestlers do you know who won an Olympic Medal?

Sure most of you will now say Kurt Angle and Ken Patera, but have you ever heard of Frank Andersson? 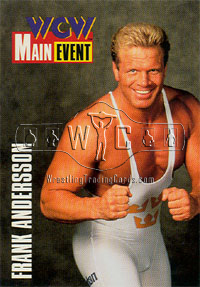 Andersson won a bronze medal in Greco-Roman Wrestling in the 1984 Olympics for his home country of Sweden.

Somehow that was supposed to qualify him for a career in Professional Wrestling, but i guess not every Olympic Medalist has the potential to become a huge star like Kurt Angle.

After wrestling for NJPW in 1991, and a dark match try out for the World Wrestling Federation in 1993, he got signed by World Championship Wrestling in early 1994 and wrestled for them until he retired in the summer of 1995.