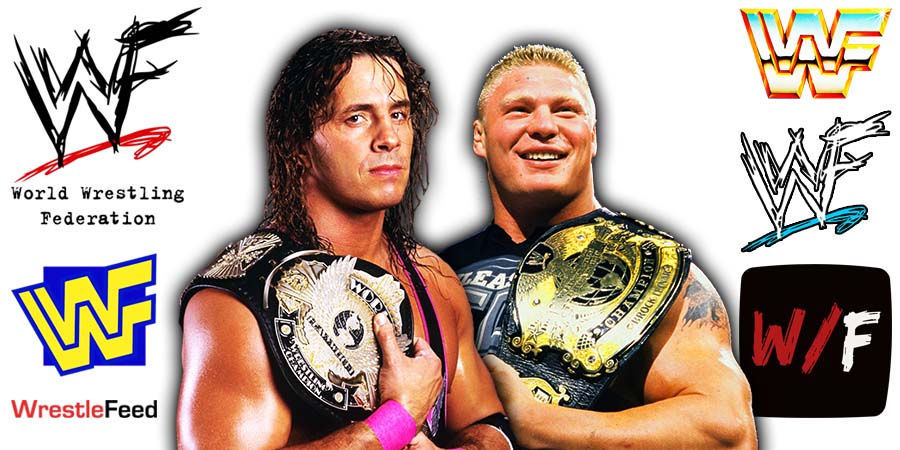 She also went on to reveal that Bret Hart is one of Lesnar’s dream matches.

Below is what Natalya said:

“My husband (Tyson Kidd) actually said this. He said Brock Lesnar is the greatest pro wrestler of all-time and I said to him, I was like, ‘Explain that’ because I just wanted to hear my husband — well he’s like a wrestling connoisseur, T.J. Wilson.

I said I wanted to know where that was coming from because I think Brock is incredible and he said, ‘You could take Brock Lesnar right now in 2022 and put him in wrestling in 1950 and his style would still hold strong. He’s gifted at his physicality, he’s more than proven himself on the mic. He evolves, he changes, he’s grown and he also gives back.’

People don’t know this, maybe it’s too much to say. I don’t wanna ruin Brock’s persona. Brock watches all of our matches in Gorilla and the last match that I had at SmackDown, he watched and he critiqued and gave us feedback and gave us advice, told us what we would do better.

He stayed there and watched, he cared and it was so cool getting advice from him. He’s just so…he’s such a badass, but I really look up to him. I really like him and he gives back.

I watch — in pro-wrestling, it’s an inside term, it’s called ‘selling’ but when it’s time to give back to somebody, he’s getting knocked on his a$$ because he knows how to build a fight and I love that about him. He really leads by example.

I think he’s really — he’s very, very talented at what he does but, what I’m seeing backstage is him giving back and I like to go to Brock for advice because I think that he’s…he does know what he’s talking about and it’s funny because he told me he would love to — he said a dream match for him would have been to wrestle Bret Hart.

We were talking last week and he said, ‘That would have been a dream match’ because I told him how much Bret was a fan of his work and he said that would be a dream match. So, anyway, I think Brock is awesome.”

During a virtual signing for Signed By Superstars on Friday, Bret said he heard about Lesnar’s dream match. He went on to compliment The Beast and then took a shot at Goldberg while doing so.

“I heard that I was his dream match. That was just a week ago I heard that. Always heard Brock was a good worker.

I’ve never heard [Lesnar was stiff in the ring].

Always heard just the opposite, that he looks stiff, but he’s a real pro in the ring. Totally the opposite of Goldberg.”

This episode was broadcasted from the Allstate Arena in Chicago, Illinois and featured matches, interviews & storyline segments on the road to the ‘WWE WrestleMania 23’ PPV.