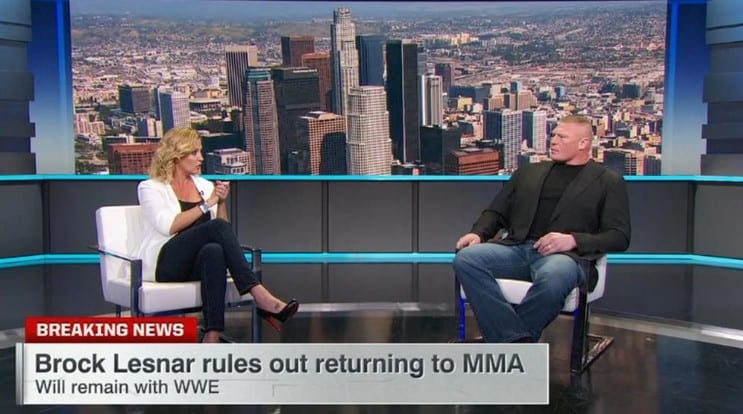 During an interview with SportsCenter, WWE World Heavyweight Champion Brock Lesnar announced that he re-signed with WWE and has officially closed the door on his MMA career.

It is a good news for all of us Old Schoolers who want a tough real man as the top guy, instead of some cruiserweight competing in the heavyweight division, not to forget Lesnar debuted when WWE was still WWF.

“The fighter inside of me wants to compete. The father, the husband – I’m an older caveman now. So I make wiser caveman decisions. So I’m here to say my legacy in the octagon is over. However my legacy this Sunday at WrestleMania will not be my last.”

Brock Lesnar also announced that he re-signed with WWE on Monday night and is going to go home this Sunday from WrestleMania with the belt. This has certainly made the WrestleMania 31 main event more interesting than before as anything can happen now since Lesnar is not leaving, and it would be great if Lesnar continues his dominance and retains the title.

It is reported that Vince McMahon offered him a deal that he couldn’t refuse. He says it took him almost a full year to decided what he wants to do.

.@BrockLesnar is a global attraction. Happy to have him re-sign a multi-year contract with @WWE. @espn @MichelleDBeadle