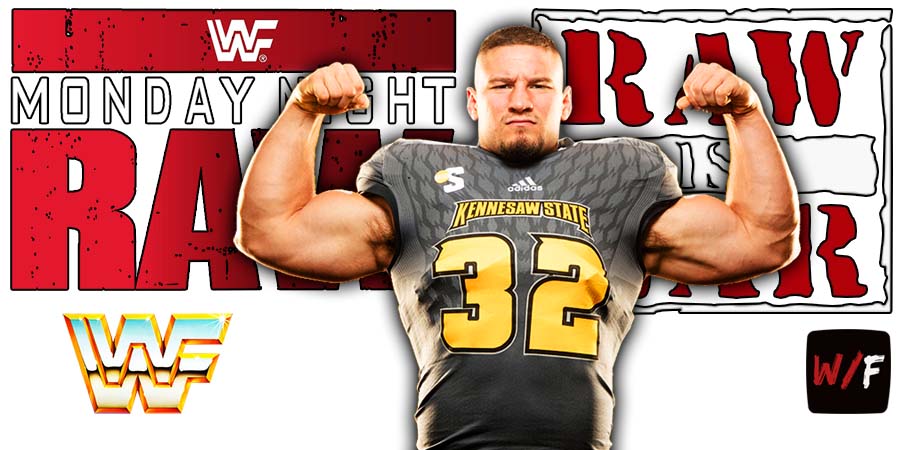 After the match, Orton said the following:

“I’ve been doing this more than 20 years now and I have never had this much fun as I’m having right now in this ring with my partner riddle. I mean that from the bottom of my heart. This man is my FRIEND.”

– Dana Brooke (c) def. Tamina to retain the 24/7 Championship (Before the match in backstage segments, Dana kissed Reggie and Tamina kissed Akira Tozawa. After the match, Akira said Dana cheated and then declared that Tamina is the love of his life, and wants a kiss. Tamina left and blew a flying kiss at him)

– The Miz & Logan Paul had a Homecoming segment in Cleveland. Miz also introduced WWE Hall Of Famer Jerry Lawler, who returned for this segment.

The Cleveland crowd was cheering The Miz at first, but they began booing when Miz said WrestleMania will never be hosted here.

– The Street Profits noted that they might face RK-BRO for the RAW Tag Team Championship at WrestleMania 38 since then beat them last week.

– NXT Champion Bron Breakker & Tommaso Ciampa def. Dolph Ziggler & Robert Roode (This was Breakker’s RAW in-ring debut. He pinned Ziggler to win the match for his team. After the match, Ziggler cut a promo on how he’s going to win the NXT Title tomorrow night at NXT Roadblock)

– Omos def. Apollo Crews (Omos had a face-off with Commander Azeez after the match)

Also Read: Bron Breakker’s Father & Uncle Expected To Be Inducted Into The WWE Hall Of Fame Class Of 2022